Cancer is an important topic in medicine. Ref. 16 points out that even if all cancers could be beaten by 2050, there still would be a shortage of money to diagnose and treat it. The reasons are that people get older and the older we are, consequently the more mutations of cells accumulate in our bodies, elevating the risk that we would get one type of cancer sooner or later.

Mutations can occur in many genes

It seems like there are about 180,000 mutations that can occur in the roughly 12,000 genes that make up the human genome. Ref. 16 points out further that in the US cancer costs 264 billion USD including 100 billion USD in direct medical costs and about 140 billion USD in loss of productivity. In comparison to other major illnesses it is clear that diabetes costs 92 billion per year, heart disease 78 billion and chronic lung disease with 31.4 billion USD.

Millions invested in research, but control more likely than a cure

By 2020 according to the American Cancer Society the number of new cancer cases is expected to increase to 16.8 million annually worldwide. By 2030 they expect it to increase further to 27 million (with 17 million related deaths) every year. Many medical authorities admit now that a “cancer control” is more likely to be achieved than a cure. Here is an overview of the average rate of cancer (new cancers every year) in the US per 100,000 people and shown for the most common types.

Average annual rate of new cancers in the United States (per 100,000 people)

The unknown impact of a healthier lifestyle

Maybe the big unknown is what would happen, if a large part of the world population would adopt a healthier lifestyle. Just imagine people would quit smoking, apply the new knowledge of healthy nutrition and add vitamin and mineral supplements. To improve their chance for survival they could also replace missing hormones by bioidentical hormone replacement and engage in regular physical exercise. For example, we know now that vitamin D3 in doses of 5000 IU per day can prevent several cancers. With this in mind, the problem has been up to now that physicians as a group have never embraced the idea of prevention. Notably, they think more in terms of curative medicine. However, with cancer this approach works only with early diagnosis, but in later stages it works often poorly as discussed under the various cancer chapters.

Many experts think that with a combined prevention approach as indicated above cancer rates could drop dramatically. Existing rates could drop by 80% to 85% within only a few years of starting such a program. I encourage everybody to prevent disease including cancer as this is much more rewarding for both the patient and the doctor.

First, Suzanne Somers interviewed Dr. Nicholas Gonzales in her book “Bombshell” (Ref. 18). He discussed a few alternative treatment methods that can be combined with conventional cancer treatment. In the following I am summarizing these methods.

1. Up to 80% of cancers are preventable and prevention is better than attempting to heal later.

2. Secondly, avoid chemicals in your food. Eat organic food whenever possible. Avoid toxins on your skin like parabens, which are carcinogens and get absorbed in minute amounts into your system. Surely, parabens are mixed into cosmetics, toothpaste, shower gels, shampoos or conditioners. Have pure water intake (reverse osmosis), remove fluoride or chlorine from the water supply using water filters. Otherwise they would interfere with important enzyme functions in your body.

3. Third, curcumin, resveratrol, quercetin and ellagic acid are a combination of supplements that will work together protecting against cancer and prolonging life (Ref. 19). 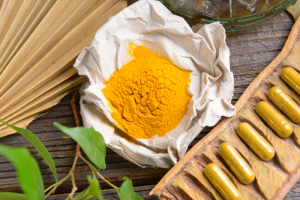 4. Furthermore, exercise is important as it keeps your circulation going and strengthens the immune system.

5. A balanced diet with a variety of foods, both plant and animal origin is what most people do best on, but there are some who have a different metabolism, who are mainly meat eaters and also some who do best with a vegetarian diet.

6. Coffee enemas: With this cleansing program the patient mixes an amount of coffee into a colonic. The coffee stimulates the sacral parasympathetic nerves, which through a reflex stimulate the liver to release its toxins (Ref. 18). Dr. Gonzales reviews the history of coffee enemas that goes back to Dr. Gerson and Dr. Kelley, both of which successfully employed it to support the immune system in patients. A detoxified liver stimulates the immune system and everything else in the body works better.

7. Bioidentical hormones are also helping to stabilize the body when a person is struck by cancer. Bio-identical hormones work even better for cancer prevention as I have pointed out throughout the various chapters.

8. Cut out starch and sugar. This prevents insulin overproduction, chronic inflammation and a weakening of the immune system.

9. Shortened telomeres predict cancer: as explained in this blog there is an accelerated shortening of telomeres in  cancer patients about 3 to 4 years before the patient comes down with cancer. It is this accelerated telomere shortening that researchers are now concentrating on in order to diagnose cancer earlier.

Selenium as a trace mineral

10. Several studies have shown that a small amount of selenium helps prevent heart attacks and cancer. At the same time one has to be cautious not to over treat with selenium to avoid elevated fasting blood sugar and metabolic syndrome. Taking selenium blood levels and supplementing with low dose selenium are of key importance when using this trace mineral for prevention.