Cancer causes can be investigated by comparing cancer rates in one population group with a comparable groups elsewhere without that cancer. In medicine this field of research is called “cancer epidemiology”. For instance, exposure of skin around the genitals to coal tar in chimney sweep boys was recognized as the cause of scrotal cancer when English physicians investigated the unusual occurrence of scrotal cancer in boys in 1775 (Dr. Percival Pott).

In more recent times cigarette smoking has been linked to cancer of the lungs, larynx, mouth, pharynx, esophagus, bladder, pancreas, kidneys, cervix, nasal passages, stomach and leukemia (bone marrow exposure). Pathologists and toxicologists have an explanation why these particular organs would be more vulnerable to developing cancer and not others.

Effects of carcinogens from cigarette smoking

Over the years thousands of excellent research papers have been published regarding the effects of cigarette smoking. These papers are mostly read by researchers and often are even too complicated to read for the average busy physician or the lay person. But the answer is simple: the concentration of the cancer causing substances (called “carcinogens”) in the inhaled smoke is highest in the airways (nasal passages, pharynx, larynx and bronchial tubes in the lungs) and at the mucous membranes of the mouth cavity. Some of the carcinogens are mixed with the saliva and swallowed thereby exposing the esophagus and stomach to carcinogens.

The majority of the carcinogens are absorbed through the lungs and immediately circulate through the blood stream to areas, which have a lot of blood vessels like the bone marrow, pancreas and the cervix that seem to be particularly vulnerable tissues. However, subsequently the body eliminates the carcinogens through the kidneys and the bladder.

It took several decades to prove once and for all that this sequence of events is the reason why these cancers are linked to cigarette smoke. It can be called the largest “experiment” on earth during the 20th century. A 26-year follow up of the US Surgeon General on 248,046 veterans showed that over 50% of current smokers died of cancer related to smoking. Among former smokers 23% died of cancers related to cigarette smoking (Ref. 1). In this context it is important to notice that no effort should be spared to help patients to quit smoking. Perhaps the best method of doing this is to combine Nicorette or Nicoderm with a self hypnosis cassette.

Other studies over the years investigated cancer rates due to carcinogen exposure in different industries, which was compared to normal populations without that exposure. This is how the cancer producing substances in industry were defined such as PBC’s, asbestos, nickel dust, benzene, mustard gas etc. and safety standards were developed that are now strictly enforced. Food preservation has been vastly improved. Moldy peanuts in the past have lead to the powerful carcinogen aflatoxin in peanut butter, which lead to liver cancer in a high percentage.

Now there are very strict regulations regarding storage and processing of peanuts and this has eliminated the aflatoxin induced liver cancer problem to a large extend (Ref. 2). Hundreds of such success stories have escaped the popular press and public scrutiny, because these scientific stories are difficult to interpret and understand. Often they also affect perhaps only a smaller population group. However, when a large fish kill happens due to leaked toxic chemicals or a large amount of malformed children are born in one part of the world, the public’s eye focuses on this type of problem, which often takes years of delicate research to sort out. 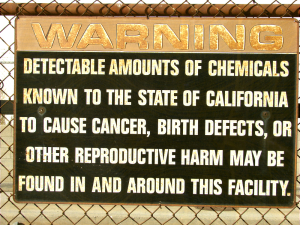 Take sports, for instance and athletic performances at the Olympics. Faster is better, bigger is better. Or is it? So, many athletes have resorted to anabolic steroids. Anabolic steroids cause liver cancer, the higher the dose, the bigger the risk. It is well known that athletes have taken five to ten fold the dosage considered safe, which has exposed them to a high liver cancer risk. Many have died from this disease, a few survived with a liver transplant. Often these negative stories are unnoticed by the public and the media, because they are busy cheering on some other winners. These are only a few examples of stories that have been told. Other stories are unfolding, still others have yet to be told.

Common cancers in the US

The average annual rate of new cancers in the United States (per 100,000 people) gives rounded figures for the most common types of cancer, expressed as new cases per 100,000 people per year in the United States( Ref. 14). According to this link the most common cancers in the US are: “breast cancer, lung and bronchus cancer, prostate cancer, colon and rectum cancer, melanoma of the skin, bladder cancer, non-Hodgkin lymphoma, kidney and renal pelvis cancer, endometrial cancer, leukemia, pancreatic cancer, thyroid cancer, and liver cancer.”