About 1 in 70 women in the U.S. get ovarian cancer and 1 in 100 women will die of it. In the U.S. it is the 4th most common cause of cancer in women, it is the leading cause of gynecological cancer deaths and accounts for 1% of all deaths among women. This translates into 21,000 new ovarian cancer patients per year and about 13,000 women die from it every year in the United States. One of the problems is that the ovaries are difficult to locate and the fact that cancer does not hurt in the beginning.

The location of the ovaries can be described in two ways. Seen from below the uterus is located above the upper end of the vagina and the fallopian tubes are attached to the uterus on each side. They reach up to the ovaries along the side walls of the small pelvis. When seen from above, there is the round opening of the small pelvic bone, which is about 10.5 to11cm(4.2″) in diameter to accommodate the head of the baby at birth. At the upper rim of the small pelvis on each side there is a groove for the ovaries, which are attached with connective tissue to this and also share lymphatic drainage among each other. This is important to know as ovarian cancer on one ovary can metastasize fairly early to the other ovary through these lymphatic connections.

During a pelvic examination (thanks to www.medartist.com for this image) the physician feels with the index and middle fingers of the left “pelvic hand” through the vagina while the right “abdominal hand” probes through the lower abdomen into the small pelvis. This way the physician will get a good feel of the size and the consistency of the uterus, both ovaries and whether or not the bowels are attached to any of the pelvic structures or move around freely. In a skinny, relaxed woman this pelvic examination is very reliable. However, in an obese woman the fatty tissue is blunting any anatomic findings and in a tense woman the examining hands cannot approach each other enough to get useful information. When this happens the physician might want to order a pelvic ultrasound through a vaginal or rectal probe. This will visualize the ovaries, the uterus and the fallopian tubes. 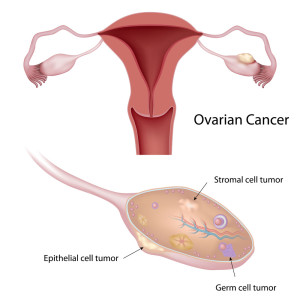 Ovarian cancer is difficult to detect

The key to early detection of ovarian cancer is a regular yearly pelvic examination and Pap test by your physician. A good rule of thumb is to start with the annual pelvic exam right after initiation of sex. There appears to be a long incubation time where the cancer grows within the ovary, possibly for several years. During this time a still benign cystic degeneration of the ovary (ovarian cyst) makes the ovary more bulky than normal and the examining physician can detect this during a pelvic examination. Later on cancerous degeneration takes place in these cysts, and this can often be visualized by ultrasound examination. At this stage only 10 to 15% of the masses found in that way are histologically cancerous. Ovaries, which are enlarged by cancer will grow rapidly, rupture and release all the cancerous content of the cyst into the pelvic and abdominal cavity.

At this point in time there is a sudden switch: the woman becomes symptomatic with abdominal pain and metastases distributed throughout the abdomen. From this point on the multiple metastases often lead to a premature death only within a few months. With ovarian cancer perhaps more so than with any other cancer it is vitally important to do regular preventative tests (pelvic exams) during the long incubation time, which can last for years, and to follow this up with pelvic ultrasound tests, if there is a fullness of the ovaries. If there is an enlargement of one of the ovaries detected a referral to a gynecologist should be done for further testing.