Lymphomas are the 7th most common cause of death in the USA. An alternative name for them is malignant lymphoma or lymphocytic lymphoma.

Between both lymphoma types about 21,000 people died in 1995 in the US. Due to the fact that lymphoma occur in a younger age group with an average of 42 years, they range 4th in terms of economic impact among all cancers in the United States. Since the early 1970’s the incidence of lymphoma has been steadily increasing. Part of this is explained by the fact that about 3% of all AIDS patients develop lymphoma and the fact that the AIDS population over the years has increased. However, this does not explain all of the increase (Ref. 3 and 4).

Lymphoma is more common in whites than in blacks, more common in males than in females. The cause is largely unknown. But we do know some factors that play a role. For instance, there are certain genetic abnormalities (Klinefelter syndrome, hereditary platelet dysfunctions etc.) where an increased incidence of lymphoma is known to occur.

Congenital or acquired immunosuppression is also known to be associated with a high frequency of lymphoma development. Chronic exposure to certain herbicides (phenoxyherbicides) leads to a 2- to 5-fold increase in risk of developing a lymphoma. Ionizing radiation such as in the survivors of the Hiroshima nuclear bomb in Japan or in people with ankylosing spondylitis who in the past were treated for back pain with X-ray irradiation, has proven to cause lymphoma. The likely mechanism here is some form of chromosomal break from the radiation leading to altered cell mechanisms and the development of a new lymphocytic lymphoma cell that multiplies rapidly into a big clone of identical cells, unless stopped by treatment. 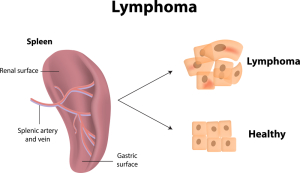 Hodgkin’s disease is a more uniform lymphoma, which is starting at one anatomic region and has a good prognosis, when detected and treated early. On the other hand the more common non-Hodgkin’s lymphoma has many histological subtypes from the more benign low-grade lymphoma to the more aggressive high-grade lymphoma. Overall the cure rates are not as impressive with these as the ones for Hodgkin’s disease.