Carbohydrates come in a dazzling diversity of foods. There is one common denominator: all of them occur in food, which is derived from plants. Carbohydrates are of importance to our physical function. Like any of the nutrition team they can be beneficial or can be a nutritional nightmare.

It goes back to the statement that food can be a powerful drug, and ultimately we are the users that sign responsible for the proper dosage.

High density carbohydrates (high glycemic carbohydrates) are transformed into glucose and released into our blood stream in a fairly rapid fashion. As a result, the release of insulin is also a relatively fast one: there is a fast high peak of insulin levels first. This leads to a fairly rapid drop in blood sugar levels after a few hours, called hypoglycemia. The result: we are feeling hungry and are ready for some more: the coffee break with a cookie or a muffin comes to mind or the mid- afternoon slump prompting you to eat a donut or chocolate bar. The densest form of carbohydrates will be found in products like sugar or honey.

The concept of high/medium/low glycemic index foods is explained in this website.

As a rule of thumb it can be mentioned, that the more processed a grain is, the higher it is in the rank of the carbohydrate density. All flour products fall into this category like bread, buns, pasta, and all the highly processed breakfast cereals. Rice in all forms belongs to this group as well. When we eat these foods, enzymes such as pepsin digest the starchy foods in the stomach and quickly break it down to glucose that is rapidly absorbed into the blood stream. This explains why 30 minutes after eating a meal with starchy food the blood sugar level has risen to elevated levels stimulating the pancreas to pour out insulin as explained above. 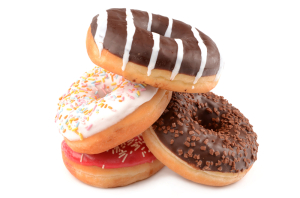 Barley and oats, as long as they are not processed into flour and instant cereals contain more fibre, and the transformation into glucose is somewhat slower. Medium density carbohydrate foods would be root vegetables like potatoes, yams, turnips, carrots, and squash.

Most fruit would rate as medium density carbs, except for varieties that are high in sugar, like bananas, mangos, or papayas. Obviously they are at the higher limit of “medium”. Also dried fruit have undergone a change in the processing: water is removed through dehydration, and the result is an intensely sweet product, which has become a high density carbohydrate food.

The problems with wheat

Newer information on wheat has shown that the chemically forced hybridizations in the 1970’s by BASF have resulted in a dwarf wheat variety that is now grown in virtually all countries around the world. Dr. William Davis (Ref. 9 and 10) has shown that Clearfield wheat, how this new variety is called, is genetically quite different from the older Emmer and Einkorn types of wheat. There have been significant chromosomal changes in that Einkorn (Triticum monoccocum) has 14 chromosomes; Emmer (Triticum diccocum) has 28 chromosomes and modern wheat, the Clearfield variety has 42 chromosomes, like spelt. Dr. Davis noted that the modern wheat, which has never been tested on humans in safety experiments, causes leaky gut syndrome, and antibodies against gliadin. Your immune system is sensitized to produce autoimmune antibodies against your own tissues, which subsequently attack your gut cells (causing irritable bowel syndrome, celiac disease and ulcerative colitis); joint cells (causing rheumatoid arthritis), thyroid cells (causing Hashimoto disease) and it can even cause MS, Alzheimer’s disease, Parkinson’s disease and colon cancer.
The solution is simple: avoid wheat and all wheat products.
For those of you who doubt what I am saying, read these two books (Ref. 9 and 10). You may find some pearls of wisdom that you can take from this.

Wheat causes the blood sugar to rise significantly after each meal that contains it and causes your insulin level to get elevated. Eventually that will stimulate your appetite for sugar and starchy foods. This leads to syndrome of insulin resistance (also called “metabolic syndrome”). Eventually this causes diabetes, obesity, heart attacks stroke and cancers (breast and colon cancer have been researched best to be caused by this metabolic change). 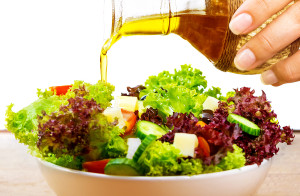 Most vegetables fall into the low density category, as they all contain a lot of fibre and water.

We are looking at leafy vegetables like salad greens and spinach, chard, cabbage varieties, onions, peppers, tomatoes, mushrooms, green beans, as well as sprouts, like bean sprouts, alfalfa or mixed sprouts. They are a great source of carbohydrates that are slowly transformed into glucose, and this way the response of insulin is less dramatic. As a result of this knowledge we are best off avoiding some of the densest carbohydrates. It may sound like a highly unpopular proposition, but sugar should be looked at as a condiment and not as a “food”, and the same is true for honey (Ref. 3, p. 99).

Even though some health-conscious individuals look at it as “natural” and for this reason superior, they overlook the fact, that we are dealing with a highly concentrated dense carbohydrate, and spoon for spoon it has the same disadvantageous effects on your metabolism as white sugar! It leads to the metabolic syndrome.

We use the medium density carbs with prudence: there is definitely nothing wrong with carrots, but we certainly would not ingest a pound of them.

Consequently we would not choose to start drinking carrot juice by the glassful. It simply is too much of a good thing, and the fibre has been eliminated from it. A few slices of potato can enhance our dinner, but transforming several potatoes into a mound of mashed potatoes equals an overdose, which no diner should be subjected to. Fruit will enhance and complement our carbohydrates, and the same is true as mentioned before: an apple can be part of a great breakfast or snack, but a glass of apple juice (the equivalent of 3 apples) is another story (too much sugar, no buffering fibre). 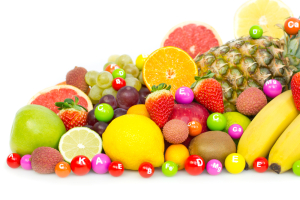 When it comes to low density carbohydrates we can feel free to fill our plate with salad greens, broccoli, tomato, or mushrooms. The benefit is also a good dose of fiber and an abundance of vitamins and minerals.

When we look at all these points it becomes very obvious, that knowing our foods and their effect on our metabolism is essential when it comes to producing a meal that is beneficial and at the same time enjoyable.

It is interesting that nutritional studies are supporting the notion that heart attacks and strokes are caused by too many high density carbs in our diet. Here are examples of two 2014 studies, Sugar Responsible For Raising Blood Pressure And Lipids; also Adding Sugar Ups Cardiovascular Risk.