Lung cancer is one of the leading causes of cancer deaths in women and men in North America. Unfortunately due to the fact that lung tissue contains a lot of blood vessels, any cancer in it will metastasize very early. This is why at the time of diagnosis of lung cancer 70% of patients have already metastases( 31% regional and 39% distant metastases ) (Ref. 1 and 2). 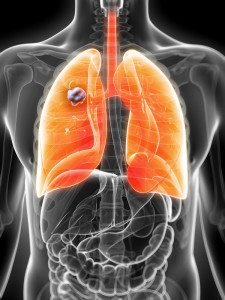 Another common presentation is that blood is suddenly coughed up (=hemoptysis) or unexplained weight loss sets in. At this point there is a bronchial cancer present that has invaded locally or has already sent metastases to the brain, the adrenal glands, the liver, bone or skin, in other words the patient is entering into a terminal cancer.