First of all, chromosomal abnormalities occur in about 0.4% of all births. They often cause mental retardation and are responsible for a number of congenital anomalies. There are 22 pairs of autosomes and two sex chromosomes in humans, a total of 46 chromosomes. A male has  a chromosome set of 46 XY , a woman has a set of 46XX. This is how conventionally the nomenclature is handled.

Furthermore, chromosomal abnormalities can affect the number or the structure of the chromosomes; they can also affect the autosomal chromosomes or the sex chromosomes separately. Chromosomes (deletions) may be missing and there may be micro deletions (also known as contiguous gene syndromes). In the following I will only mention the common chromosomal abnormalities. However, there are literally hundreds of syndromes that occur and that usually have the name of the person(s) that first described them followed by “syndrome”. 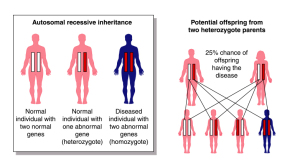 The doctor can diagnose a chromosomal abnormality from lymphocytes. The technician obtains these by separating them from the rest of the blood. Not everybody gets this test routinely, but the doctor will order it when he/she suspects a genetic abnormality and this needs confirmation or ruling out. The lab technician cultures the lymphocytes together with phytohemagglutinin, which stimulates the cells to divide. The technician adds colchicine to arrest the dividing cells at the stage when each of the chromosomes is separating into two chromatids. At this stage the chromatids attached to the centromere. Traditional Giemsa stain makes the cells visible. Other technicians use the fluorescent banding stain technique. Further refining is possible with DNA probes containing fluorescent tags, which will help to locate genes or DNA sequences on a specific region of a chromosome.

A useful technique is “fluorescence in situ hybridization” (FISH). Here a double stranded DNA breaks down into a single-stranded DNA. A probe of known amino acid sequence coding for a specific gene defect attaches to the abnormal DNA sequence by hybridization. Using fluorescent microscopy this band is made visible on the chromosome, which hence makes it easier for the geneticist to study the gene defect. A geneticist who works with these tests all the time will be able to tell whether a set of chromosomes is normal or abnormal. As a result, with tests such as FISH it is possible to pinpoint the genetic defect of the following chromosomal abnormalities to a certain region within a chromosome, as I will explain even more  in more detail for each of the conditions. In the following table use the links to find more details regarding the respective chromosomal abnormalities. 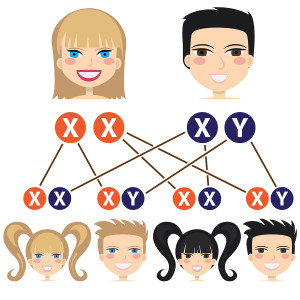 There are 5 major categories of chromosomal abnormalities as follows (for links see “Related Topics” below).