In the US the highest cancer mortality for men is from lung cancer (70 deaths per 100,000 people per year).

Lung cancer has been rising for women as more women fall prey to cigarette advertising and the nicotine addiction. Men as a group have been quitting the habit more and more and the statistics are improving. The above cancer statistics are from 1993, and there has been a slight decline overall since for males, but not for women (see Ref.3).

Physicians like to stage cancer according to mostly 3 stages (localized cancer, regional metastases and distant metastases) at the time when the cancer is diagnosed. From then on snap shots are taken of the survival rate of cancer patients over a period of time. For instance, if melanoma of the skin is ignored and regional invasion of the skin is allowed, the 5-year survival rate drops dramatically from 90% to 50%. If distant metastases are found prior to treatment, the 5-year survival rate drops to 14%! This underlines the importance of early detection in cancer diagnosis and treatment.

When all the common cancers are grouped together and survival data are calculated, the message is clear:

Early detection and early treatment result in much better survival rates (improvement of 30% to 50%).

This is true except for two cancers, lung cancer and pancreas cancer. These two organs have a lot of small blood vessels (we call them “vascular organs”).

Once there is a cancer in them, it has been shown in these two organs histologically that the cancers are invading the blood vessels early in the disease process. This may explain why the majority of lung and pancreas cancers are already at a later stage at the time of the initial diagnosis. Progress is being made by addressing this problem through more sensitive screening tests that are being investigated. 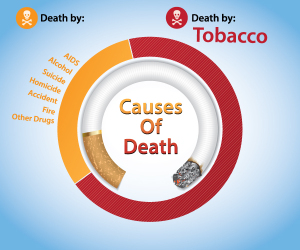 Here is the story of cervical cancer

In the 1950’s cervical cancer was the leading cause of premature death for women. However, with the introduction of the Pap test the natural history for this cancer was dramatically changed.

If it is found and neglected (as some few alternative health proponents might do), cervical cancer is still as vicious a killer as in the 1950’s. However, today the physician will do the yearly check-up with a pelvic examination and a Pap test. In 1954 Dr. Papanicolaou suggested a classification system involving cell changes from normal cells to overt cancer cells of the cervix ( Ref. 4) . This classification system allowed gynecologists to develop cancer treatment methods that were tailored to the severity of the cell findings. Since the introduction of this screening and treatment method in the 1950’s and 1960’s cancer of the cervix as an epidemic cancer has literally been wiped out. In India and many other countries with less developed medical care cervical cancer is still the dreadful disease that the Western countries knew only back in the 1950’s. However, new efforts in India are now introducing mass screening for cervical cancer as discussed in my blog.

Cervical cancer has become the role model for the slogan “CANCER CAN BE BEATEN”.

However, this statement is somewhat misleading as there are many cancers where this has not yet been achieved. More has to be done in these cancers to diagnose and treat the early stages. But with respect to cervical cancer today we can diagnose the precancerous, atypical and dysplastic cells before they are cancerous and remove these cell types. As these would have been the cells that develop into the earliest nest of cancer cells called “carcinoma in situ” (meaning : “early cancer in one spot”), it can be readily understood why in this case “cancer can be beaten”.

Physicians all around the world have learnt a lot from this cervical cancer story. They have developed aggressive, but yet tissue sparing treatment methods such as cryotherapy with liquid nitrogen or laser therapy. For more invasive cancer the conization technique was developed, where the removed tissue is carefully analyzed to ensure complete removal of all cancer tissue.

The screening using the Pap test is an example of how a regular screening method can pick up the earliest changes and treatment can then proceed with less invasion and change the overall survival rate for whole populations at risk. Now in 2006 with the new human papilloma virus vaccine this good news story has entered into a new phase of even more powerful prevention against cervical cancer. If girls are vaccinated before they have engaged in sex, a high percentage will be protected from developing cervical cancer later in life (“cervical cancer vaccine”).