Cancer of the stomach used to have the highest mortality rate of all the cancers worldwide. However, in the US the rate of new stomach cancer has declined since 1935 and is now less than 1/3 of the rate of where it used to be. To the contrary, in Japan as well as in Eastern Europe the stomach cancer rate has remained high.

In other countries, such as the South American countries Costa Rica and Chile, stomach cancer rates have also stayed high. Key to good 5-year survival rates is early detection through cancer screening with gastroscopy as it is practiced in Japan. In Japan the cancer rate is coming down in those patients who are closely screened for stomach cancer. This idea has not caught on well yet in the US where the orientation is still more curative than preventative. Much can be done also in terms of avoidance of carcinogens from various sources, which at the present time seems to not be too popular with the public (Ref.1 and 2). 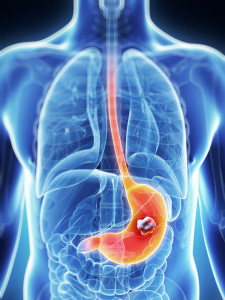 This illustrates how different this disease can be in different countries around the world and it also shows what difference screening with gastroscopy can make. The cancer survival statistics are extremely poor in the US, largely because the patients are usually in a late stage of cancer at the time of diagnosis when the survival figures are inherently poor. This is the reason why the survival rate is only 5 to 15% in the US. Stomach cancer is twice as common among males compared to females and black males have stomach cancer 1.5 times more often than white males. Stomach cancer occurs between the ages of 40 and 70 with the peak in the late 60’s.