A study following 792 persons for 13 years showed that shortened telomeres predict cancer. Telomeres are the caps at the end of chromosomes that protect the DNA between cell divisions.

Initially all of the patients of the Northwestern and Harvard study were cancer free, but after 13 years of follow-up 135 of them had developed various kinds of cancer. They consisted of prostate, skin and lung cancer as well as leukemia and others. The study was conducted by the Northwestern University, Evanston, Illinois and Harvard University. The researchers took blood tests at regular intervals for 13 years and determined the average telomere length of white blood cells in all patients. They found that those who developed cancer later had a rapid loss of telomere length over just a few years. The loss in telomere length was the equivalent of 15 years of life in just a few years. Eventually the telomere length stabilized, 3 to 4 years before the cancer developed. At the point when the accelerated shortening stops, a critical point is reached. It usually takes just three to four years from there till cancer occurs. This type of information could turn into an important screening test for the future to diagnose any kind of cancer that may develop in a person.

Another line of research comes from Stanford University. Dr. Blau is describing a new technique that allows researchers to elongate telomeres of cultured human cells that are used in drug testing. A modified RNA is added to the tissue culture, which elongates telomeres of cultured cells significantly making the cells divide faster and allowing the researchers to get test results for anti-aging drugs quicker. It is expected that this will help in finding new drugs that could elongate telomeres and will prevent cancer and cardiovascular diseases. 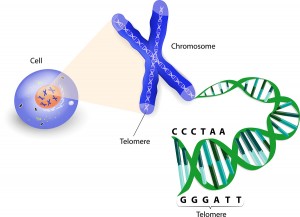 More about lifestyle changes and cancer in general see this link: https://nethealthbook.com/cancer-overview/