The three main approaches to treatment of cancer have not changed that much over the decades: surgery, radiotherapy and chemotherapy.

One of the most obvious things for the physician to do is to cut out the cancer. This is sometimes easier said than technically done, particularly when it turns out at surgery that the cancer is more advanced than originally thought.

However, with chemotherapy or radiotherapy in conjunction with surgery this can be partially overcome. Also, surgery can have complications such as infection, bleeding or blood clots after surgery. With a heightened awareness the physician can spot any problems like this early and deal with them immediately.

In combination with more refined early cancer screening tests and a proliferation of new surgical techniques there has been a mushrooming of new treatment forms. I already mentioned above laser surgery for cancer of the cervix as one such treatment modality. Another newer technique is Mohs’ technique of shaving skin cancer down to the normal skin level underneath while doing frozen sections, with close to 100% cure rates.

Radiotherapy treatment is often applied following surgery, for instance after breast cancer surgery to eradicate local metastases around the axilla. With head and neck cancer radiotherapy might be the only therapy being used.

Other forms of radiotherapy are linear accelerator treatments or the “Gamma knife”, a special form of stereotactic radio-surgery used for brain cancers. A number of unique modifications of radiotherapy are being employed by radiotherapists. For thyroid cancer radioactive iodine is used. The radiotherapist is exploiting the fact that thyroid cells take up iodine vividly and a radioactive iodine atom is used to deliver a curative radiotherapy dosage. Following this treatment the patient is then hypothyroid and has no thyroid hormones, but this is easily replaced by giving the patient thyroid hormone pills. Radioactive seeds might be implanted by a specialist to control prostate cancer that cannot be treated by surgery. 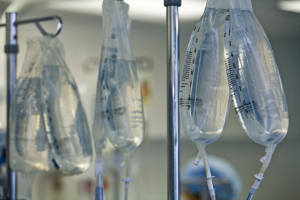 Chemotherapy has experienced a transformation following the successes with the treatment of leukemia, lymphoma and Hodgkin’s disease.

What chemotherapists learnt was that lower dosages of several chemotherapeutic agents, combined and given according to a schedule with intervals where the bone marrow can recover, were more effective on the long term with higher survival rates.

To get away from the toxic effect of the traditional chemotherapeutic agents new ideas were born. Immunotoxin therapy is one such new idea: An antibody against a tumor specific antigen is coupled with a toxic substance, which is released when the tumor binds to the immunotoxin complex.

The toxic substance kills the tumor cell, but not the healthy tissue or bone marrow cells. This technique is being used in phase 1 and 2 trials for non Hodgkins disease patients as well as various leukemias and lymphomas of the bone marrow and should be soon available on a larger scale through Cancer Clinics(Ref.5 and 6).This is not the “all cure”, but it can be used as a tool to remove the remaining tumor cells after heavily treating the non Hodgkins disease first with chemotherapy. In Ref. 5 there was a response rate of 80% to 100% when immunotoxin therapy was used as a “mop-up” step following chemotherapy.

The TIL Story: tumor-infiltrating lymphocytes and gene therapy

Rosenberg et al. have perfected a carefully orchestrated form of immunotherapy at the National Cancer Institute/ Bethesda, Maryland (Ref. 7).In the early 1990’s a new technique involving lymphocytes, which were isolated from the patient’s cancer, was developed by this group. Briefly, cancer tissue obtained from the patient through surgery was digested in the lab until it was broken down into single cells.

Through cell separation techniques the cancer researchers could then isolate the lymphocytes, called ” killer lymphocytes” or cytotoxic lymphocytes. As these lymphocytes are supposed to infiltrate the tumor, they were termed “tumor-infiltrating lymphocytes”(or “TIL”). However, in cancer patients these seem to need a bit of a boost and need to be directed specifically against the patient’s tumor surface antigens. Had they worked optimally, then the patient would not have developed the cancer on the first place. This is exactly what the Rosenberg group could show. They found that the patients had some response to their own tumor, but that it was weak or even absent.

They developed a gene therapy where they used retroviruses in the lab to introduce gene material that would give the TIL a boost so that they would attack the cancer the way nature meant it to be. This immune response can be amplified by interleukin-2, a cell mediator. In Ref. 7 the authors have provided a 7-year follow up study of 409 patients with metastatic melanomas and kidney cancers who were treated with high dose interleukin-2. Surprisingly there was a complete cure in 8% and a partial response in 9%. There was a measurable blood response in the group that experienced a complete cure, which was carefully studied. This will help the researchers to refine the immune therapy and improve on the outcome. Other authors have found a 30% survival advantage in ovarian cancer with this therapy( Ref.8) in patients where in the past there was no hope of survival.

Oncologists (cancer experts) are usually the ones who know most about cancer pain and how to treat this. It is beyond the scope of this web-based Net Health Book to get into all of the details of this complex topic. However, I like to give a brief summary of what the patient with cancer pain can expect in terms of treatments.

Generally speaking in the last few years physicians have become more patient oriented realizing that there is a difference between the science and the art of medicine. With cancer we have a situation where science is still lagging behind with respect to good solutions, so the challenge to the treating physician is to show compassion to the pain and suffering of the patient realizing that there is ultimately little that can be done medically at the end-stage to attack the cancer. The patient often is depressed, may be in denial and needs counselling, support and reassurance. The patient will want to have the pain treated as best as possible along with the depression and likely will want to contact also a minister or priest regarding spiritual questions.

With regard to pain issues gabapentin has become a common pain modifier as it is very well tolerated by more than 90% of patients and can be combined with other medicines without worries about drug interaction (Ref.16). Gabapentin is used for the pain associated with diabetic neuropathy. The pain associated with incurable cancer is treated in much the same fashion. For more severe pain morphine and morphine-like narcotic drugs are titrated against the pain.

Clinical trials are a powerful tool that University Hospitals are using when new more effective therapies are developed. All of the leukemia chemotherapy progress would be unthinkable without prior clinical trials that have proven that the newer therapy saved more lives. I like to briefly explain how these trials are conducted. There are three phases:

These are just the “nuts and bolts” of clinical trials. In light of “evidence based medicine” modern clinical trials have improved vastly in respect to the validity in light of the above mentioned parameters. Usually there are a number of clinical statisticians who are part of the research team. They ensure that the trial is set up with large enough groups of patients to look at several parameters and that the results are valid. Despite the best of all intentions, occasionally a major toxic side-effect of a new drug is overlooked. This is the basis of the post drug release surveillance where practicing physicians are asked to report any side-effect that they notice to a central site. The data is now collected nation wide and sometimes, if the result is proving to be toxic enough, a medication might be “withdrawn voluntarily” by the drug company.