According to a study food intake of selenium from fish and vitamin E (alpha-tocopherol) from reindeer meat was the reason why northern Finnish men have fewer heart attacks and lower mortality from heart attacks than a control group of men from Southern Finland.

Apart from a high incidence of heart attack rates with a high mortality in Southern Finland researchers found that Chlamydia pneumoniae IgA antibody titers were high in the south, but low in the north. The markers for getting less heart attacks and having better survival following one were high selenium blood levels, high vitamin E and low Chlamydia pneumoniae IgA antibody titers. It is conceivable that vitamin E and selenium supplements would be beneficial for those with low levels.

An article in Critical Care Medicine in July 2015 showed that there was a protective effect of selenium on mice with artificial heart vessel blockage. Dr. Mark Roth and colleagues from the Fred Hutchinson Cancer Research Center, Seattle, WA blocked coronary arteries for 1 hour, then perfused the injured heart tissue again. They found that two hours after the injury there was a high concentration of selenium in the injured heart tissue. They also found the worse the injury, the more selenium they found in the injured tissue later.

Next they restricted blood flow to the animals’ hind legs. Again, there was an increase of selenium in the injured limb, but not in the uninjured limb on. The authors suggest that selenium could be given to patients who recover from heart attacks to minimize the injury to the heart tissue.

New revised guidelines for selenium supplement intake were published online in July 2015. 70μg/day is recommended for men and 60μg/day for women. For lactating women 75μg/day are recommended. Note: In the past the recommended supplementation was 100 μg/day. 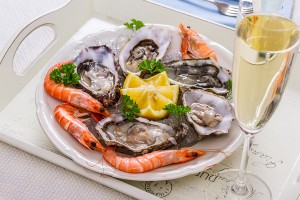 It is important to consider selenium supplementation, but it is also crucial to be aware that more is not better. Educated guesses are not good enough. Selenium blood levels give the proper answer. Another useful supplement is the antioxidant vitamin E that gave men from northern Finland better heart health in combination with selenium.