Symptoms of thyroid cancer may be absent in the beginning. The earliest symptoms may be a small hard spot (called “thyroid nodule”) in the thyroid gland that grows in size.

It would feel very hard, but may initially not be painful. This is the stage where you need to see a physician who should refer you immediately to a specialist for a needle biopsy. Many nodules are not cancerous, but it may be the first step into that direction. Otherwise symptoms are dependent on tumor growth, which is typically local first and with distant metastases later.

Choking feeling around the neck

There could be a choking feeling around the neck, some pressure first, but increasingly breathing problems, if the trachea is surrounded. One sad symptom can be hoarseness, which would be an indication that a laryngeal nerve has been damaged by the thyroid cancer. Problems swallowing would indicate a local metastasis near the esophagus. 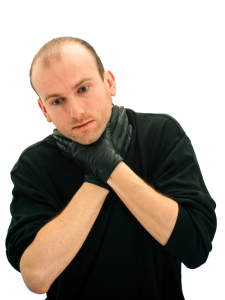 Distant metastases such as a lung metastasis or a bone metastasis would give symptoms from these organs, such as breathing problems, pneumonia or bone pain. Weight loss and loss of appetite are other non specific symptoms. Unfortunately, by the time the patient has symptoms, the cancer has already spread beyond the point where the prognosis could be improved significantly. I cannot overemphasize how important it is to immediately have a work-up about any new lump around the throat area (thyroid nodule).