I have summarized information on colon cancer in a shorter chapter as part of the differential diagnosis of abdominal pain. Here I will discuss colon cancer in more detail. Colon and rectal cancer are common cancers in the Western civilized countries. In the U.S. they make up about 15% of all cancers. About 150,000 new cases are diagnosed every year and 75,000 die every year from this disease.

From the age of 35 to 40 years onwards there is a steep increase until the age of 80 years when the incidence curve flattens out. Studies have lead to a broad knowledge base regarding the questions of why colon cancer develops, how to diagnose it early, some genetic markers, whom to screen and what diet to eat to minimize the risk of developing it (Ref. 1 and 2). 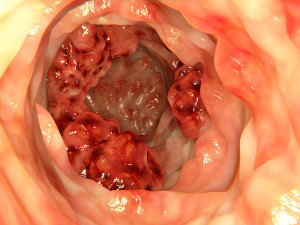 When high colon risk families were studied, it was learnt that the highest risk for colon cancer is in families with familial polyposis, where literally hundreds of colon polyps are growing on the lining of the colon because of a genetic flaw. Each of these polyps has a stalk, which is attached to the lining of the rectum or colon. On top of the stalk is a fleshy little mushroom like polyp, in which changes take place that lead to cancerous degeneration.

At this stage the new cancer focus is born. From here onwards new growth is happening with a spread inside the polyp mass, then invading into the stalk, next invading the base of the stalk, which is the rectum or colon at large. Armed with this knowledge gastroenterologists started to treat the polyps, which originally were thought to be harmless, and removed them. It was learnt that the cancer rate could be reduced drastically this way. Even in some families where less polyps occurred, complete cancer prevention of the rectum and colon was possible. Not all cancers of the rectum and colon are developing out of polyps, but 85% do. The other ones, it has been shown, develop directly from the lining of the rectum or colon itself or develop within the muscle of the rectal or colonic wall. The fact that 85% of all cancers of the rectum and colon, even in those without family history of familial polyposis, develop out of polyps has important implications for colon cancer screening.

Gastroenterologist Dr. Stephen O’Keefe of the University of Pittsburgh School of Medicine did an interesting experiment. He took 20 black men in the US and 20 in rural South Africa and did a diet swap: the South Africans were fed fast food, a diet high in fat with generous quantities of meat and cheese (fried chicken, burgers and fries). The black Americans in the US were fed a rural South African diet, high in fiber and low in fat; it contained beans and cornmeal, plenty of fruit, vegetables and very little meat.

This study shows how important it is to switch to the right diet, a diet full of fiber, protective lycopenes and absent junk foods.