Leukemia is a form of  cancer that can affect both children and adults. It can also be acute or chronic.Leukemia originates in the bone marrow, which is where all of the precursor cells are manufactured that later appear in the blood stream.

In children the acute form has been mostly noted in the media as much progress has been made in the past few years with regard to treatment successes. However, the chronic leukemia forms are more common in childhood.

The symptoms of leukemia are due to the fact that normal cell precursors in the bone marrow are crowded out by the leukemia cells and this can lead to bleeding as the megakaryocytes, the precursors of the platelets are being suppressed. In the same vain that precursors of the granulocytes and the lymphocyte (immune cell) precursor cells in the bone marrow also get crowded out resulting in serious infections from the lack of circulating infection fighting cells (granulocytes and lymphocytes). 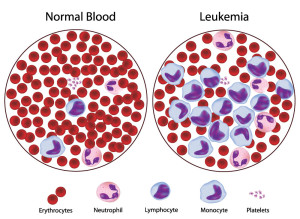 The exact cause of leukemia is unknown, but some risk factors factors are smoking, exposure to ionizing radiation and to certain chemical solvents like benzene.

As we will see later in linked pages there are acute and chronic forms of leukemia, both in adults as well as in children. The 5-year survival rate is important in leukemias a leukemia is unlikely to return when the 5-year mark has ben reached, so living beyond the 5-year mark is often thought of as  a cure.

With some forms of leukemia the genetic cause is known, for instance with chronic myelogenous leukemia (CML) there is a translocation between two chromosomes, called the Philadelphia chromosome, which causes this type of leukemia. Also newer treatment procedures like interferon therapy and bone marrow transplants have made a tremendous change in the improvement of long-term survival rates. This will be explained in the appropriate pages.