Skin cancer is a very common cancer. It is visible, it can be diagnosed early and generally speaking the prognosis is very good as it tends to metastasize much later than for instance melanoma does. However, the topic of skin cancer is not as simple as it may sound at first glance.

There are 29 histologically different types of skin cancer beside melanoma (which is pigmented and is dealt with under its own heading). The reason for this is as follows.

There are three layers of the skin: the superficial layer (epidermis), the dermis and underneath the dermis is the subcutaneous tissue. Each of these layers has substructures, which would be too detailed and perhaps inappropriate to explain here. Each of these substructures can turn malignant resulting in a total of 29 different skin cancers.

We will concentrate on the most common skin cancers here and deal with them in some detail. They all develop from the epidermis layer and they are the basal cell carcinoma and the squamous cell carcinoma. Generally speaking any skin cancer is detected by the fact that something grows on the skin, which has not been there before and becomes gradually more protruded or grows in width. When this happens, see your physician for diagnosis and further advice regarding what to do. 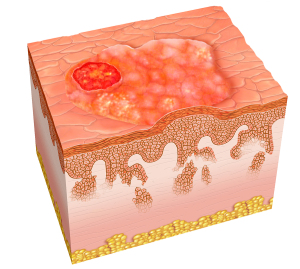 In the white population of the U.S. the non-melanoma skin cancer is the most common cancer with a frequency of more than 700,000 new cases diagnosed every year. The mortality rate is only about 2100 per year and improving as close to 100% of skin cancer should be curable, if detected early and removed at that stage (Ref. 6).

Also look for more info at these sites: