Any disease that interferes with the normal functioning of the nervous system is considered a neurological disease. A number of very varied clinical presentations such as headaches, strokes, Parkinson’s disease, seizure disorders, carpal tunnel syndrome, multiple sclerosis and others all belong into this group of diseases. Choose a topic from the table above and click on the link for more details.

I would like to outline some of the common principles of these diseases and what the patient and their loved ones should know when one of these diseases is encountered. Before any treatment can be done, the treating physician will need to diagnose the condition. If the condition is misdiagnosed the consequences could be disastrous.

Let me give you an example: A 40 year-old patient had numbness in the right thumb, index finger and middle (=long) finger. This got worse with heavy lifting and grabbing of heavy objects. The patient saw his family doctor and was told that this likely would be due to carpal tunnel syndrome (CTS) and that a small surgery at the wrist would bring this back to normal. The doctor sent the patient to a neurosurgeon (or plastic surgeon) to have this done. The surgeon examined the patient carefully and noticed that there were a few symptoms and findings of CTS that were missing. Also, he found out by more detailed questioning that there were a few symptoms that did not fit the diagnosis of CTS.

For instance, there was pain in the right side of the neck as well as right shoulder pain whenever he felt numbness in his right hand. The surgeon felt that two studies should be done: EMG studies (electromyography studies) by a neurologist and X-rays of the neck in an X-ray clinic. When the surgeon saw the patient again, he could explain to him that the provisional diagnosis of CTS was wrong and that the tests showed the following: there was no blockage of the electrical signal traveling along the median nerve through the wrist and for this reason the patient did not have CTS or need wrist surgery. However, the X-rays of the neck (cervical spine) showed a severe degenerative process in the lower end of the neck with narrowing of the space between the 5th and 6th vertebral bodies of the cervical spine.

We count from the top down where C1 would be the first vertebral body and C5/6 was the area in this patient where the narrowing and pinching of the right C6 nerve root had occurred. The surgeon had asked about a previous sports injury and motor vehicle accident. When the patient was 16 years old he had a serious fall from a bicycle and banged his head. There was no fracture at the time, but it took him 2 months to regain most of his neck mobility. Unfortunately, 3 years later he was a passenger in a car driven by a drunk friend and they hit a telephone pole. Fortunately nothing was fractured, but he had sustained a moderately severe whiplash type neck injury, which took 6 months to heal.

He was able to return to contact sports, where he had sustained several smaller neck injuries. However, he was symptom free for many years until he awoke with a stiff neck that lasted a day or so at age 41. Gradually he also developed different symptoms such as intermittent shoulder pains, arm pains and numbness in his right hand. The surgeon explained to him that the old injuries had led to some scarring that eventually caused a degenerative arthritic condition at the right C5/6 level of his cervical spine. He also explained carefully that this type of problem would not improve, but that it would often be bearable for a number of years until neck surgery would be necessary. The standard procedure for this would be a discectomy and fusion surgery done at the same time (at the C5/6 level in the case of this patient). 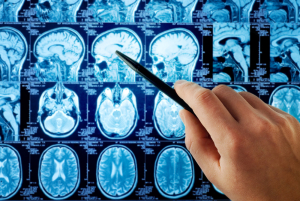 A surgical release procedure of this patient’s wrist would have done nothing for his numbness symptoms that originated from the neck. In this case the patient was able to live with his condition for another 4 years. At that time the condition worsened and an MRI scan showed a disc herniation that pushed directly on the right C6 nerve root. The patient required a discectomy with a fusion surgery. All of the symptoms disappeared, but he elected to no longer do contact sports for fear of re-injuring his neck.

This is an example demonstrating the importance of a correct diagnosis. In neurological conditions this is even more important than in any other specialty of medicine. It will become clear in all of the conditions that are described in this section that the symptoms have to be identified, the physician needs to come to an accurate diagnosis, based on history, examination of the patient and tests, and only then can treatment for the condition be successful. With neurological conditions often a neurologist, the specialist in this field, needs to be consulted.