A simple phobia (alternative name “specific phobia”) is a common form of pronounced anxiety triggered by a specific situation or the sight of an object, which then is vehemently avoided.

About 11% of the population has this type of anxiety. Women are more affected than men (about 65% versus 35%).

Depending on the triggering object or situation there are 5 subtypes( Ref.2).

With a dog phobia the child may have been bitten by a dog and in later years the mere sight of a dog makes the patient more and more anxious until it grows into a full blown dog phobia. Mouse or spider phobias are common in many women. Repeated warnings about snakes by parents and observing dangerous snakes on TV can turn into snake phobias later in life.

If storms, heights or bodies of water are the cause of phobias, there is usually a frightful experience in childhood that started this. In time this can grow into a phobia, which when not treated can turn into disabling behaviors interfering with work situations, travel and enjoyment of life.

This type of phobia seems to run in certain families and is often associated with a very strong vasovagal response leading to fainting at the sight of blood.

Such a person may debone a chicken in preparation of a meal and when there is a trace of blood visible on a cut bone, the patient faints. This can be dangerous, if the patient falls on a hard surface during a fainting episode and sustains a skull fracture. Most of the times, however, the patient feels it come on and takes precautions not to fall. Nevertheless this should be treated. Other such situations are the taking of blood, injections in the doctor’s office or the watching of surgeries on TV.

In this type of phobia there is a certain situation in the patient’s life that brings on the fear, for instance a fear of tunnels,which is reinforced every time that the patient takes a train that travels through a tunnel.

Another situation would be an elevator phobia, a fear of flying etc. With these types of phobias there are two peaks, one in childhood and one in the mid twenties. A fear of enclosed places may have originated by an event in the past where the child was playing hide and seek and was hiding in a cupboard. Another child may have played a joke on the first one and locked the cupboard for a period of time. The fear of being left in the cupboard to suffocate or starve to death likely went subconscious even after the child was released later. Such traumatic childhood events are often the cause of phobias regarding enclosed places later in life. 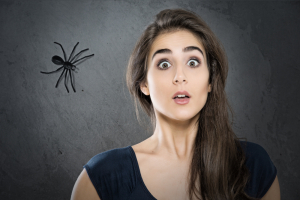 Other types of phobias

Children’s fears of costumed characters belong into this group or avoidance of certain situations for fear of choking, vomiting or contracting an illness. Separation anxiety in children is also an entity that should be mentioned here. The child shows signs of panic attacks and anxiety attacks, may vomit, have abdominal pains and may even suffer again from bedwetting. The symptoms can be suddenly brought on the moment there is talk of the parents going on a trip or moving away from a familiar surrounding.

Animal phobias, specific phobias, blood-injection-injury phobias start usually in childhood. With height phobias it can start either in childhood or in early adulthood. The remainder of the phobias start in adulthood. Phobias that persist from childhood into adulthood disappear only in 20% of cases. There seems to be a familial tendency towards some phobias such as animal type phobias and situational type phobias. However, the individual persons develop their own type of phobia(their specially feared animal or their special situation ,which will trigger a panic attack).

Treatment for simple phobias is through avoidance when this is possible. Otherwise it is through behavior modification by gradual exposure to what is bringing on the phobia. However, this needs to be done in full cooperation with the patient with the knowledge that the purpose of this is to desensitize the patient. In many cases this can be done without a therapist.

For more severe phobias the patient may want to seek the advice of a psychologist versed in these matters. Biofeedback methods, behavior modification, and hypnotherapy treatments have all been shown to be effective. As these methods are so effective and have no side effects, there is very little room for intervention with medication. An exception would be a flying phobia in a business man who has to travel to an overseas meeting. Anxiolytics as listed above under treatment of panic disorders would be a short term solution.

However, this business man should then seek the services of a hypnotherapist who will treat him with a deconditioning technique under hypnosis as described by Milton Erickson and Ernest Rossi in Ref. 6. I have personally witnessed many cases that were solved with simple techniques like this and many of these patients have been spared dependency problems with anxiolytic medication. However, these alternative techniques require patience and persistence and some patients are phobic about “being put under” (being hypnotized). Biofeedback methods and behavioral modification techniques as well as cognitive therapy methods would likely be more appropriate for them.