Depression is a very common illness. It exists in several forms.

If only depressive episodes occur with normal periods of the affect in between, this is called “unipolar disorder”. Other people seem to be very light dependent and suffer from depression mainly during the winter months. These are said to have “seasonal affective disorder”.

They benefit from light therapy, but they also respond to antidepressant medication. Finally, there is the “bipolar disorder” where there are episodes of depression alternating with manic (euphoric) episodes. 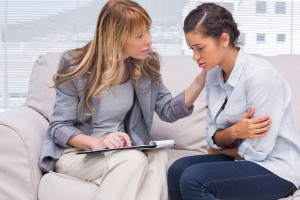 For depression the symptoms are a mixture of depression, irritability and anxiety. The patient has a depressed looking face with drooping corners of the mouth.

There is tearfulness, lack of sleep and restless sleep with early morning awakening. Loss of appetite results in weight loss. On the other hand some depressed persons overeat instead and show significant weight gain. Desire for sex is often diminished or entirely lost. Speech is slow and monotonous. The person interviewing a depressed person notices that all the energy is being drained, which makes the interviewer feel tired out. Any topic that is touched is negative, it is almost as if the depressed person sees the world through invisible negative glasses.

Although the onlooker is aware that this is a distorted way how the patient sees the world, to the patient this is very real. This discrepancy form the basis for suicidal thoughts and behaviors. The depressed patient realizes that the world around him or her does not see things as negatively as they are, and this will make the patient feel misunderstood, isolated and distraught. The next point of distorted reasoning for the patient is suicide as the “only” way out of this misery. Very often these thought processes are kept inside.

Dr. Burns( Ref. 1) has developed over the years ways how to measure depressive scores, which are a valuable tool to quantitate the degree of depression and bring to the surface all the hidden thoughts that linger in the brain of a depressed person. Dr. Burns also describes in this book a way to unmask the distortions of thought patterns of the depressed person. I recommend this book to any depressed patient as a resource along with the medicine and counseling that your doctor can prescribe for you. Most of all a depressed patient needs to seek a physician’s advice to prevent suicide.

Underlying depression is a hormone disbalance in the hypothalamus. It is there where the mood is located at least in part.

The medical model of depression says that there is a depletion of serotonin stores in th brain. The newer antidepressants help to restore the serotonin level back to normal. That is the one side of the coin. The other side is that the depressed patient needs to learn to reprogram their distorted way of thinking and this is beautifully explained in Ref. 1. Some of this reprogramming of the mind can be done by reading books such as Dr. Burns New mood therapy book. But when a person is depressed, they are often not in the mood to read.

Counseling to support the patient with depression

This is why counseling is the other treatment modality that psychiatrists recommend.

A psychiatrist, psychologist, physician or other therapist can do counseling. The purpose of counseling is to give support, but also to influence the person with depression to see the other side of life that is normal  and to help in the transition of taking responsibility for the way we think. This approach is called the cognitive therapy approach . It has the advantage that it strengthens the depressed person and helps the patient in a non judgmental way to see what he or she just has done to himself without being aware of it. It is a valuable aid to work through the thought processes.

Whoever does the counseling needs to check for suicide potential. Patients usually are willing to talk about whether or not they have thought of ending it all and what method they have been thinking about.

A psychiatrist best treats patients who have suicide risk on an emergency basis. Many jurisdictions allow to have a suicidal person certified for a short period of time until they are no longer a risk to themselves or others. People who are suicidal require admission to a psychiatric intensive care facility and started on antidepressant medication right away. Sometimes the psychiatrist will decide that a series of 6 to 12 electroshock treatments would be the best way to get through this high risk time. Each case is different and needs judging on its own merit.

In the past the only antidepressants were tricyclic antidepressant medications. However, the side-effects on the heart rhythm and deaths from serious irregular heart beats with drug overdoses in suicidal patients was unacceptable.

There are several 5-hydroxytryptamine receptors with slightly different action and the psychiatrist can choose whether a strict antidepressant action or a combined antidepressant and anxiety relieving action is the goal of therapy in a certain patient. The physician can keep side-effects for the heart, the sympathetic and the parasympathetic nervous systems at a minimum with these newer antidepressants. Ask your doctor regarding side-effects.

Sexual dysfunction can be a side-effect of antidepressants

If sexual dysfunction is a problem with some of the other antidepressants, nefazodone (brand name: Serzone) may be the answer. It has antidepressant and anti-anxiety effects without suppression of the parasympathetic nerve, which controls sexual function. However, use of antihistamines like Seldane and Hismanal, which by themselves are harmless can lead to unsafe high levels because of the blockage of a clearing pathway in the liver and heart toxicity would result. Your doctor can explain this further.

Bupropion (brand name: Wellbutrin SR) is not an SSRI, but is another newer antidepressant, which seems to help by stimulating other brain transmitters. It has no side effects on the heart, but can lead to seizures in those prone to them.

Another class of antidepressants are the monoamine oxidase (MAO) inhibitors. Phenelzine (brand name: Nardil) is one such antidepressant. As the MAO enzyme has wide distribution in the body( not just in the brain), it follows from this that there can be significant side-effects that may necessitate it to stop the medication. When the patient takes food with tyramine (such as cheeses) or over-the-counter nasal decongestants( with phenylpropanolamine) the blood pressure can suddenly shoot up to dangerous levels to the point where a stroke can occur. There are other foods and wines that the patient needs to avoid. In my opinion there are safer antidepressants than these, but discuss the pros and cons with your physician.

2. Read how SAMe supplementation can improve effects of antidepressants by 35%: https://nethealthbook.com/news/same-a-supplement-for-depression/

3. More info on  low testosterone and depression in men: https://nethealthbook.com/news/depression-and-low-testosterone-in-men/