An anxiety disorder from medical condition can be brought on by changes in blood chemistry to which the brain reacts with anxiety, panic attacks, obsessive and compulsive behaviors.

However, the blood tests tell the physician that the reason for the anxiety is the medical condition and when the medical condition is treated, often the psychiatric symptoms abate. Examples are hormone changes with hypo- and hyperthyroidism, hypoglycemia, pheochromocytoma and Cushing’s syndrome (overproduction of cortisol). However, other diseases such as congestive heart failure, pulmonary embolism, arrhythmias as well as respiratory problems such as chronic end stage bronchitis or severe pneumonia can all cause anxiety disorders. Many neurological conditions such as encephalitis, multiple sclerosis, Parkinson’s disease, vestibular dysfunction and others as well as metabolic conditions such as porphyria and vitamin B12 deficiency can also cause it.

Treatment is directed at the primary underlying medical condition. In the case of hypothyroidism thyroid hormone replacement would normalize the anxiety disorder, in the case of emboli in the lungs, which is associated with extreme shortness of breath and anxiety, the condition stabilizes very quickly within a few days of heparin treatment in the hospital.

Some medical conditions are complex such as in Parkinson’s disease and in dementia that can be complicated by the presence of an anxiety disorder. Occasionally anxiolytic therapy has to be used for a period of time until the medical condition settles with appropriate medication and treatment. 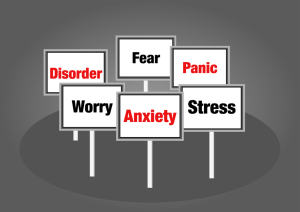