Anxiety disorders are very common illnesses. However, they need to be distinguished from normal anxiety and fear, which are healthy emotions that may be protective emotional reflexes for people so that they look after security, shelter and plan their financial affairs.

Pathological anxiety occurs in the anxiety disorders, which will be discussed as follows. In panic attacks, panic disorders and phobias this anxiety is intense and comes on very fast. In others it may take longer to build up like in post traumatic stress disorder or anxiety due to a physical disorder.

Within each of the anxiety disorders there are shades of mild, moderate and severe making it often challenging for the physician to make a correct diagnosis.

Two symptom complexes are commonly encountered in the description of anxiety disorders:

I will briefly describe them here so that they are known entities later with the description of the various anxiety disorders.

1) Panic attack: According to Ref. 2  there are 13 somatic or cognitive symptoms as listed below that are typically associated with panic attacks. To qualify for a panic attack 4 out of these possible symptoms have to be fulfilled according to these authors.

There are three types of panic attacks:

unexpected panic attacks, where there is no identifiable trigger.

The situationally bound panic attacks occur on exposure to a triggering factor, such as with a fear of dogs, snakes or spiders.

The situationally predisposed panic attack would be one such as driving a bus, where possibly most of the time driving a bus would be O.K., but then there would be specific times where the patient suddenly panics. In another case it would be O.K. to start the bus ride, but 40 minutes into riding the bus the panic attack sets in. 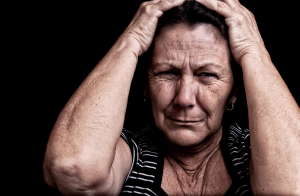 2) Agoraphobia: This is an anxiety about being in a place or in a situation where it would be difficult to escape from. The person with agoraphobia avoids situations or places where this anxiety would be brought on. It makes life very awkward and costly. Examples are fears of elevators, bridges or fear of flying.

Note that many physical diseases have symptoms of anxiety associated with them as explained here: https://nethealthbook.com/news/five-diseases-associated-with-anxiety/