PTSD, also termed posttraumatic stress disorder disorder follows a gross traumatic event that was either experienced personally or that was witnessed from up close. The initial stressful event would be such an experience as a rape at knife point, a bloody lethal accident, witnessing a beheaded accident victim and others. Rescue workers who have to remove dead bodies after earthquakes or in other similar settings are often also affected. The response at the time of the event must involve the intense emotions of horror, fear or helplessness. In the case of children this may be witnessed as agitated behavior.

Subsequently to the event the following criteria must be fulfilled (Ref. 2):

1. persistent re-experiencing of the traumatic event

2. constant avoidance of stimuli that were associated with the traumatic event

4. there is increased arousal state all the time meaning that any little happening or sound, which has a resemblance to the original event makes the patient overreact emotionally

5. this clinical syndrome must be present from the traumatic event onwards for at least 1 month or more

6. the emotional reaction to the traumatic event must have such devastating emotional consequences that the patients cannot function properly in the work setting, in social settings or other important areas of their lives

The patient is persistently anxious and has insomnia (=difficulties to fall asleep). There are often nightmares that wake the patient up and then it is difficult for the patient to fall asleep again. The lack of sleep leads to a higher vulnerability to develop depression alongside the PTSD. The patients may become irritable or have anger outbursts. They find it difficult to concentrate on a task at hand and to complete it. They feel that their future is likely compromised with a shortened life span, expecting trouble in the job world, trouble finding a marriage partner, and their friends see a complete turnaround from the bubbly persons that they often were in the past to an emotionally crippled individual. Any psychiatric problem that may have been there in the past and was perhaps not completely resolved will now flare up and likely will require medical intervention.

In the average U.S. community PTSD occurs in about 7%. Studies among high risk groups such as war veterans, victims of criminal violence or victims of disasters such as volcanic eruptions show rates of 25% to 50%.

Symptoms of PTSD usually occur by 3 months after the traumatic event. 50% of the cases resolve their PTSD within 3 months from the start of the symptoms. The symptoms with the same event can differ tremendously depending on how close to the source of violence the patient was, how long the exposure time was, how severe the physical and/or emotional trauma was. There are many internal factors that influence the severity of PTSD such as childhood trauma, history of mental illness in the past, present mental state just prior to the traumatic event etc.. It also matters, what social and family support there is for the patient. 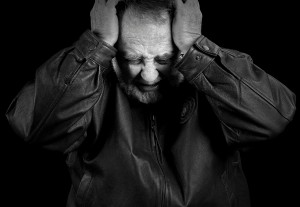 If the PTSD is still present more than 3 months after the beginning of symptoms, a series of counseling with a psychologist or psychiatrist should be arranged to prevent it from getting more entrenched.

The psychological techniques that have been found useful in treating PTSD are behavioral modification, behavioral desensitization methods, cognitive therapy and analytical hypnotherapy using ideomotor signals( Ref. 5). For some patients it takes months, for others years to work through these painful emotional memories, but persistence and hope will carry the patient through. Often other problems that were buried subconsciously are being faced alongside the other therapy for the PTSD and the patient might even feel better than before the PTSD occurred by the time the therapy can be terminated.

The prognosis (outcome) with treatment is good. The symptoms to watch for in the untreated, but chronic PTSD case, are suicidal thoughts from an undetected and denied reactive depression as a result of the symptoms from the untreated PTSD. Intervention to prevent suicide is the most important step in these cases. This is then followed by the therapies mentioned above.