Bipolar disorder (manic depressive illness) is characterized by alternating cycles of extreme high to the point of a manic episode and a period of depression.

However, there is a lot of variation from person to person where some show and some do not show fairly regular cycling of these two conditions.

Others are not showing much manic behavior and they may just pass as being depressed from time to time. When a group of depressed persons is followed for 5 years by psychiatrists there is usually about a 20% rate who suffer from unipolar disorder (=depression) to bipolar disorder (=manic depression).

The bipolar mood disorders are particularly vulnerable to sudden changes and should be under close supervision of a psychiatrist well versed in these conditions. It is only after assessment and treament with such therapy as lithium or some of the newer atypical antipsychotic medications, that the patient’s mood and behavior will stabilize.

These patients should not be followed by the general practitioner alone in the beginning until the psychiatrist has properly assessed the exact condition of the patient and the potential for violence. Untreated bipolar disorder is one of the conditions in man capable of the most bizarre behaviors such as throwing furniture out of a window or running wild on a killing spree. It is tragic that often these cases could have been treated weeks and months before, if the family members had known what symptoms to look out for.

Bipolar I disorder: In this disorder there is an alternating course of major depressive episode with a full manic episode.

A manic episode is a distinct period where the mood is abnormally high, where the patient has a decreased need for sleep, a pressured speech, grandiose thinking, risk oriented behavior, agitation and possible irritability.

With a manic episode one the important symptoms is a lack of the need for sleep. The patient may either get up hours before others do, but have seemingly limitless energies. In fact some patients can go several days in a row without sleep. There is an increased need for social interaction, calling on old friends, including calling on strangers at all hours of the day. Such a manic episode will last at least 7 days or more. In 50% to 60% of cases a manic episode is followed or preceded by a major depressive episode (Ref. 2).

In this disorder a major depressive episode alternates with a hypomanic episode.

A hypomanic episode is defined as a period of 4 days or more, where the patient’s mood is persistently elevated, irritable and where the patient exhibits some grandiose thinking , pressured speech, flight of ideas and risk oriented activities. Such activities could be unrestrained shopping sprees, foolish business decisions or inappropriate sexual indiscretions. There is a decreased need for sleep, where the patient feels rested after only 3 hours of sleep.

Patients with this bipolar II disorder may not call a hypomanic episode abnormal, but relatives and friends are the best judges in knowing what is normal for the patient and what is hypomanic and the physician or psychiatrist will depend on these informants. As the patient ages, the intervals between episodes tend to decrease. Also, about 10% of patients with this disorder have 4 or more hypomanic or depressive episodes in the course of a year. 85% of patients have a normal mood between episodes, but 15% will show a labile mood, have relationship and employer problems between episodes. Over a period of 5 years about 10% will develop a manic episode. 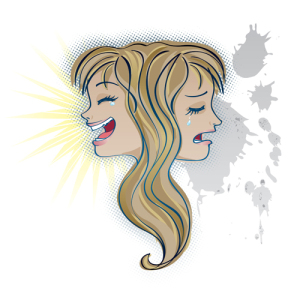 Treatment of any form of bipolar illness should be in the hands of a psychiatrist, at least initially as care must be taken to properly classify and treat this condition. Lithium carbonate is the drug of choice for more than 30 years. It is safe, provided blood levels are taken from time to time and the kidney function and thyroid function is checked as well from time to time. Many patients stabilize on lithium salt alone.

Young patients with mania need higher doses of lithium salt to achieve a therapeutic blood level than older patients whose kidney function is slower. There is a lag period of up to 10 days before the lithium effect sets in. This means that during the initial phase antipsychotic medication such as haloperidol (brand names: Haldol or Peridol) or other antipsychotic medication has to be taken to control the acute manic phase. Lithium stabilizes mood swings, reduces aggressiveness in bipolar patients, stabilizes biological sleep/wake rhythms, but leaves normal mood untouched.

About 67% of patients with bipolar disorder will respond to lithium. Ask your doctor about other side effects and your particular situation.

Acute manic psychosis is often treated with risperidone (brand name: Risperdal Tablets) or olanzapine (brand name: Zyprexa), which have less extrapyramidal side effects than Haldol. Psychiatrists use a few other medications for acute manic states and at times the optimal medication has to be found for a patient by trial and error.

Depression is being treated with antidepressants as mentioned under unipolar disease above.