Substance-induced anxiety disorder can be caused by many substances (medications, “recreational”drugs or toxins).

Withdrawal of some drugs or medications are also able to cause anxiety.

Symptoms can be indistinguishable at first from panic attacks, social phobias, obsessive-compulsive disorders or general anxiety disorders. But on further questioning of the patient it becomes apparent that the pattern of the anxiety disorder, the late onset of a panic disorder in a patient 45 years or older does not fit. However, for a substance-induced anxiety disorder there are no age limits; it occurs at the age of the person who abuses a substance. Similarly, there are other “clinical clues”, namely the presence of other physical symptoms such as loss of balance or dizziness, which comes from the toxic effect of a substance on the nerve cells in the balance organ of the inner ear or in the cerebellum. The anticholinergic effect of drugs and medications can interfere with normal bladder and bowel function.

Intoxication or withdrawal from a substance can lead to headaches, loss of memory, slurred speech or in severe cases of intoxication even to loss of consciousness. The symptoms of substance-induced anxiety disorder usually resolve within 1 month of withdrawal from the substance.

If the symptoms last longer than that, the psychiatrist or psychologist will reconsider the diagnosis as it appears then that an underlying primary anxiety disorder is now responsible for the continuation of the symptoms. With some benzodiazepines it may take a month after cessation of the medication before withdrawal sets in and the beginning of the symptoms at that time would be taken as the beginning of the substance-induced anxiety disorder. Here are some common substances.

Some substances that can cause anxiety disorder

Medications that can cause anxiety symptoms

Ask your doctor if you have symptoms on any of these medications. Do not change the present dosage yet, but see what your doctor says. Sometimes blood levels can be done to determine whether the medication you are taking has lead to a high or toxic level. All that is necessary may be an adjustment of the dosage. In other cases it may be that you have an unexpected reaction to the medication and an alternative medication would likely be used instead. 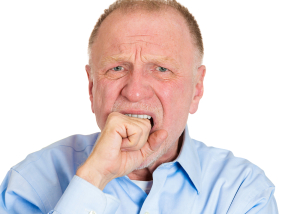 Once the offending medication, toxin or illicit drug is stopped, the substance-induced anxiety will disappear in the majority of cases. However, if it persists the psychiatrist has to reevaluate whether there is a second problem or whether the diagnosis was incorrect in the first place. Usually psychotherapy is needed and behavior modification methods often are being used. Occasionally non addicting drugs such as the SSRI antidepressants are used. Anxiolytics (such as the benzodiazepines) should be avoided because of their addiction potential on the long term.