Patients with generalized anxiety disorders worry excessively about everything all the time.

If this persists for more than at least 6 months, the psychiatrist or psychologist will diagnose this disorder. The following conditions also have to be met:

1. the patient cannot control the worry.

3. the worries and anxiety may not be perceived by the patient as”excessive”, but on further questioning it is clear that it interferes significantly with normal functioning in social situations, at work and in other areas important to the patient’s normal life activities.

5. the intensity, the time it lasts and the frequency of attacks are completely out of proportion with how a normal person would react to the feared event. Patients with generalized anxiety disorder tend to worry about ordinary day to day responsibilities at home or at work.

Patients with this disorder will complain about muscular symptoms such as a feeling shaky, trembling, pain, soreness and twitching. Patients may somatisize and complain of various symptoms such as cold hands and feet, dryness in the mouth, diarrhea or nausea, a lump in the throat, frequency of urination, sweating or clammy hands. Sometimes the doctor might find in addition a medical condition such as irritable bowel syndrome or tension type headaches. To complicate matters, generalized anxiety disorder can occur together with other psychiatric conditions such as:

1. a mood disorders such as dysthymic or major depressive disorder 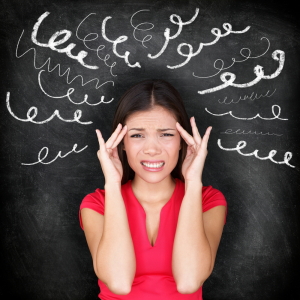 Once patients get into a good trance and feel comfortable talking under hypnosis or communicating with ideomotor signals (usually finger signals), then the root of the psychiatric problem in the subconscious memory stores can be quickly identified and alternative ways of coping with different life situations can be suggested. It is often rewarding for the patient as well as the therapist to see that only a few hypnotherapy sessions can solve a seemingly hopeless anxiety problem in a short period of time. Once successfully treated with hypnotherapy the patient stays symptom free from then onwards. This is so, because the subconscious pattern of thinking that was disorderly before is normalized after the successful treatment. Cognitive and behavioral therapy is useful as well, but it does not seem to penetrate as deep into the subconscious (where the fears and anxieties are located) as hypnotherapy does (Ref.5, 6 and 9).