95% or more afflicted with anorexia nervosa are young females. The onset is usually during adolescence. These patients have an abnormal sense of body image, where they think of themselves as overweight, when they are actually below normal weight. They are terrified of becoming obese. They refuse to maintain a normal body weight. In women one of the hallmarks is that they have no menstrual periods (amenorrhea). All of the body functions are “put on spare flame” and one such function is the gonadotropin hormone. Reduced production of this hormone leads to ovarian malfunction(amenorrhea). About 1 to 3% of the 15 to 20 year female age group suffer from anorexia nervosa. There is a significant number of anorexia nervosa cases, where childhood molestation likely was the triggering factor (see Ref. 2).

This study from the North Dakota School of Medicine and Health Sciences compared the eating behavior of a group of sexually abused children aged 15 to 20 with a control group of nonabused children. The study showed that the abused children developed a dissatisfaction about their weight and in particular they were desiring a leaner body weight. At times of emotional upsets they would eat less and use methods of purging to loose even more weight.

There are likely other factors such as perhaps a genetic tendency for depression. Depression, by the way, is present in 85% of anorexia nervosa patients. This was documented again in a Swedish study (Ref. 3), where 50 teenagers with anorexia nervosa were compared with 51 normal teenagers as control group.

This was a longitudinal study where the same persons were followed up and intensely interviewed at the ages 16, 21 and 24 years for 10 years. The findings were that mental illness(mostly depression) was part of anorexia nervosa and that the outcome of this eating disorder is dictated to a large extent by how well this is controlled. Conversely, the mental illness cannot be stabilized, if the anorexia nervosa is not addressed. 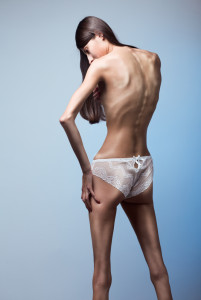 As this is mainly a psychological disorder, the earliest symptom is an obsession about body weight, even when the weight is normal or already below the normal. Patients may complain about other health problems such as bloating, constipation or abdominal symptoms.

Due to hormone changes there is a loss of sex drive and as I mentioned before a lack of menstrual periods (called amenorrhea) in females. Other physical symptoms are a slow heart beat, low body temperature (hypothermia) and low blood pressure. Due to a lack of female hormones in females there is a male body hair growth pattern and a fine hair growth all over the body (lanugo hair). Due to a lack of protein there is a development of edema (water retention in the tissues). Depression as mentioned above is common. Apart from the above mentioned hormone changes these other hormone changes tend to occur: low thyroid hormones, low luteinizing hormones, high cortisol levels.

When the body weight is reduced to less than 15% below ideal body weight, virtually every organ system malfunctions. The most dangerous among these are cardiac disorders as well as fluid and electrolyte disorders. Heart size and cardiac output decrease. The induced vomiting and use of laxatives and diuretics leads to severe dehydration and a metabolic alkalosis. This is diagnosed by blood tests, which show a dysbalance in the electrolytes and a low potassium level. These electrolyte changes can lead to dangerous fast irregular heart beat patterns, which will cause sudden death.

The physician will take a thorough history and ask pertinent questions surrounding the above mentioned symptoms. The weight that is 15% or more below the ideal body weight for the person is a powerful pointer as to the diagnosis. However, other physical conditions such as a brain tumor, Crohn’s disease, a hidden cancer or another mental illness such as schizophrenia has to be excluded by doing appropriate tests. In females one of the requirements of the diagnosis of anorexia nervosa is that there are no menstrual periods despite them having been normal in the past. The hallmark for the diagnosis is the over consuming fear of being or becoming overweight, which is not diminished by the actual weight loss. Associated with this condition is the presence of a major depression, which has symptoms of its own such as sleep disorder, mood disturbance, loss of weight and suicidal thoughts or behavior. Between cardiac death and death through successful suicide, anorexia nervosa has a mortality rate of 10 to 20%.

This consists of an immediate therapy and a long-term therapy. The first step is to normalize the body chemistry and induce weight gain well above the cutoff line of 75% of ideal body weight. This is best done in the hospital setting.

Then there is the long-term therapy consisting of a psychiatric assessment and treatment. This usually involves behavioral-cognitive and/or psycho-dynamic treatment methods. If a specialist in eating disorders is available, a referral to that resource person should be done.

Family therapy for younger persons is also helpful, as the family provides the support when the patient returns to the old environment. Often family members say exactly the wrong thing, which triggers the patient to return to the anorexia nervosa behavior pattern. Family therapy addresses that issue. Often fluoxetine (brand name: Prozac) is used alongside the other psychotherapeutic treatment modalities. Fluoxetine lifts the depression and helps to control the phobia associated with eating disorders. It is safe to take this antidepressant medication for several years until the person has stabilized and adopted healthy living habits. Contrary to popular believe fluoxetine is not addicting, but there are side effects as with any antidepressant. An alternative is St. John’s wort, an herbal antidepressant.