The hall mark for bulimia (also medically termed “bulimia nervosa”) is binge eating at least twice per week or more followed by attempts to reduce the inevitable weight gain.

This would include inducing vomiting and to take water pills and laxatives. It would also include fasting and over exercising. Bulimia patients are also overly concerned about body shape and weight loss, but unlike patients with anorexia nervosa patients with bulimia nervosa have usually a normal weight.

About 1 to 3 % of young women suffer from bulimia nervosa. Another 5 to 6% are borderline bulimia nervosa patients. Depression and bulimia are found often together in these patients. There seems to be a certain mental personality make-up before eating binges set in. Several studies have shown significant differences from controls as is discussed in the table.

For instance, certain brain hormones, called cytokines were 3 times higher in bulimia nervosa patients when compared to controls (Ref. 5). On the other hand the brain hormone vasopressin was found to be higher in cerebrospinal fluid, which surrounds the brain of bingeing patients with bulimia nervosa or anorexia nervosa. Patients with major depression showed the same pattern, but not normal controls without binge behavior or major depression (Ref. 6). Sheppard-Sawyer et al. (Ref. 7) has shown that disinhibited eating (binging) is increased by watching movies that are sad and that threaten the self esteem of the movie goer. Patients with bulimia nervosa have a personality make-up where this behavior is triggered easier than in controls who were not influenced in their eating behavior. This may explain some of what is going on in the minds of those who are exposed by thousands of images on TV, in the movies , from magazines and on the Internet that play on the body image. Bulimia nervosa patients may not have as much resilience as others and may act out their subconscious aggressions with binging and purging. Cotrufo et al.(Ref.8) has studied the hormone status of women with bulimia nervosa and found that the aggressive behavior was directly linked to an increased testosterone level in the blood stream when compared to controls with normal low testosterone levels. This difference was significant. 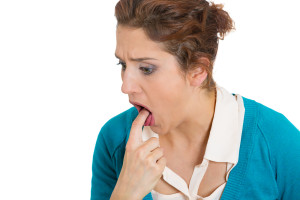 The physical findings of bulimia nervosa patients are mainly due to the result from purging. Fluids and electrolytes can be very abnormal, such as low potassium levels, that are found in the blood. The self-induced vomiting often has eroded the tooth enamel wityh regard to the front teeth.

The parotid salivary glands may be swollen because of an inflammation which leads to narrowed ducts and saliva retention from repeat vomiting. The longterm abuse of ipecac syrup, which is used to induce vomiting, can lead to serious cardiac abnormalities with a cardiomyopathy (heart muscle disease), hypotension, and irregular heart beats that can be one of the causes of death. These patients tend to be more talkative and cooperative about their illness than are anorexia nervosa patients. They are less introverted, but have a tendency to be more impulsive, and tend to lean towards drug and alcohol abuse. They also tend to be depressed.

It may be difficult to diagnose this condition, if the patient does not admit to frequent bingeing and purging. The official classification demands an average of binge-purging twice per week over at least 3 months. The physician will attempt to look for the elements of the various symptoms above and inquire about symptoms of depression as this frequently coexists.

Your treating physician needs to rule out other medical conditions like borderline hypothyroidism or side-effects of medications that you may be taking. If there is a hidden alcohol dependency problem this would have to be attended to as well. Otherwise the treatment cannot be effective.

An Australian study (Ref.9) has documented that depression and hopelessness have to be treated first before instituting cognitive therapy, otherwise there is a high dropout rate from the treatment program.

Another study(Ref. 10) has shown that fluoxetine (brand name: Prozac) is effective in reducing bingeing and purging, even if there was a failure to psychotherapy treatment.

Ref. 11 provides evidence that after 6 sessions of a cognitive therapy program it should be evident, if the program is working with respect to cutting out binging or not. If the program did not work by then, alternative therapies should be pursued. However, other literature states that a combination of antidepressant therapy with Prozac and cognitive or behavioral therapy is superior to either one treatment modality alone. These treatment modalities can also be combined with the self hypnosis regarding weight control.