Psychotic Disorder Due To A Substance

Home » Mental Illness » Schizophrenia » Psychotic Disorder Due To A Substance

Like with general medical illness a psychotic disorder due to a substance can be caused by alcohol, illicit drugs, but also from side effects of medications. Moreover, on withdrawal of some substances psychosis can also occur.

For instance, when a patient is an alcoholic and is used to regular intake of a high percentage alcoholic beverage such as whiskey and this patient suddenly stops drinking, withdrawal will occur; there often will be a full-blown withdrawal psychosis (delirium tremens) within 48 hours. Typically the auditory hallucinations consist of voices, but there often are also visual hallucinations and tactile hallucinations such as bugs crawling over the bed sheet and on the skin.

There may be a distortion of the body image when looking in a mirror, or peoples faces are being misinterpreted as the brain makes connections where there aren’t any. The patient also may have tactile hallucinations “feeling” imaginary bugs underneath the skin and scratching the skin to the point of injury. With cannabis psychosis does not develop that frequently, but when it does, it does so early on with the development of marked anxiety, frequent mood changes and persecutory delusions. After the episode there often is no memory of it(amnesia). The higher he blood levels of cannabis are the more likely hallucinations occur.

When amphetamine or cocaine use has been stopped after the occurrence of a psychosis, the psychosis may not stop the way the patient and he physician had hoped for. Sometimes these psychotic states can last weeks or even months past the point where drug use was stopped, even when the patients are treated with antipsychotic medication. The reason may be that there can be toxic changes of the brain receptors and changes in the brain metabolism that take time to repair(see Ref. 4). 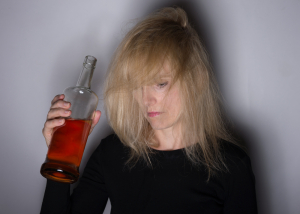 Psychotic Disorder Due To A Substance

It is not known what makes some patients more susceptible than others, but factors that have been identified are differences in enzymatic elimination rates in liver and kidneys leading to fluctuating blood levels. In some patients very high levels lead to psychosis. Other patients at risk are older patients, particularly above 75 years of age, where the elimination of medications is hampered due to a much reduced kidney function as well as a slower metabolism. Often medications have to be reduced and drug companies often offer medication with reduced dosages for older patients. Drug interactions are another factor, if the patient is taking several medications for different organ systems.

For many medications or toxic substances the same set of detoxifying enzymes are needed in the liver to eliminate them from the blood stream. This creates an overload situation and toxic blood levels causing psychosis can result. You may have read warnings about using the over-the-counter antihistamine Seldane (removed from the market in 1998) when the patient was also on erythromycin for an infection. Each of these used separately alone are harmless, but when taken together they can cause serious harm. Some of the medications such as anti-epileptic drugs or theophylline levels for asthmatics, which also have this interaction in the liver, can be monitored through serial blood level determinations. This avoids toxic levels in cases where both these medications have to be taken together.