A lung abscess happens often in patients who are older, where the immune system is weak and where modification and suppression of the normal cough reflexes is common.

Frequently there is a mechanism of aspiration of stomach contents by vomiting and aspiration of part of the vomitus with all the bacteria from the pharynx, or gastrointestinal tract.

Often the first step is that aspiration pneumonia develops. Subsequently out of this a lung abscess can develop. High risk persons are alcoholics at the height of a drinking bout. Other patients at risk have severe neurological diseases such as MS, stroke or Alzheimer’s in stage 3. Then there are patients in a coma and patients during major surgery. When patients are  paralyzed from a general anesthetic there is a great risk of aspiration of stomach contents. The bacteria that cause a lung abscess are usually anaerobes that stem from the gastrointestinal tract, from the oral cavity or the pharynx.

The feared bacteria are Staphylococcus aureus. This is a pus bacterium that is devastating to lung tissue due to a lytic enzyme it produces. Intravenous drug users are also at a high risk when they work with contaminated needles. The bacterium can find its way through the bloodstream into the lungs.  There it chew up the normal lung tissue and causes a lung abscess.

Occasionally there are endemic break-outs of Klebsiella pneumoniae in hospitals. This is another bacterium type that also can lead to lung abscesses with complications. Here is a link to a simplified picture of a lung abscess.

The patient usually is sick for several weeks or months with a lack of appetite and the resulting weight loss. A chronic cough is usually present, but may not be so in a frail elderly person.

With a smaller abscess that drains well there might be only a low-grade fever of 101.5°F (38.5°C). However, when a patient has a larger abscess some of the toxins get into the bloodstream. In this case there would be a much more acute clinical picture with high temperatures of 103°F (39.5°C) or higher.

Phlegm production with a foul smell

Most of the time the phlegm production is copious and has a foul smell. The physician looks for certain signs such as dullness to percussion in one area of the lung with diminished breath sounds over this area using the stethoscope. In a chronic case with a delay of the diagnosis of a lung abscess clubbed fingers can develop. When a patient has chronic lack of oxygen for several months a thickening of the fingers develops. The medical term for this is clubbed fingers, which are due to chronic shortage of oxygen in the tissues.

Blood tests usually show an increase in the white blood cell count with a “shift to the left” on a smear meaning that there are a lot of pus cells circulating in the bloodstream. In the early stages chest X-rays usually show an area of pneumonia with subsequent development on repeat X-rays of a lung cavity, which is due to the lung abscess. In this image the white arrows point to the abscess cavity, the black arrow points to the fluid level. CT scanning may be required to get more details about the abscess cavity. Blood cultures may be detecting the offending bacteria. Occasionally Entamoeba histolytica, a pathogen in the gastrointestinal tract may cause a lung abscess and this or another pathogen might be isolated from one of the phlegm (sputum) samples.

The best sample usually is obtained early in the morning and the patient should be encouraged to cough the sample right into a sterile container without mixing it with saliva. Otherwise, there is a danger that other anaerobic bacteria that are also contained in the saliva would confuse the clinical picture. After treatment the bacteria would be difficult to culture, so it is important to obtain as good a bacterial diagnosis as is possible before treatment is begun. The clinician may decide to do a transtracheal (through the windpipe) or transthoracic (through the chest wall) needle biopsy to obtain an uncontaminated, pure bacterial sample for isolation of the pathogen.

Occasionally the clinical picture is not clear-cut and the lung specialist may want to do a bronchoscopy to rule out a tuberculous lung cavity, that may be mistaken for a lung abscess. Biopsy material and culture samples obtained through this procedure, which has its own risk, can clarify the diagnosis and ensure proper treatment. 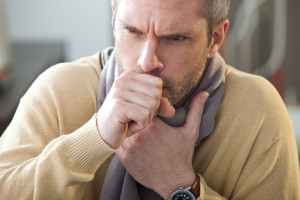 Treatment consists mainly in giving the appropriate antibiotic therapy. Initially this is given by the intravenous route. Later when the patient is afebrile this can be switched to oral antibiotics. However, it is important that the lung abscess is followed along with repeat imaging studies until it is resolved completely.

This requires often a prolonged antibiotic therapy for 2 to 4 months! This should be done under proper supervision by a physician, preferably by a lung specialist. The choice of the antibiotic is dictated by the culture results. Often the clinician might start the patient on intravenous clindamycin initially or a combination of penicillin G (or erythromycin) with Flagyl until the culture report is back.

At that point a switch to an antibiotic that fits the culture report would be done, if necessary. The death rate of an anaerobic lung abscess is about 15%, if Staphylococcus aureus or Klebsiella pneumoniae are involved, can be 30 to 50%. Occasionally there might be a case where the antibiotic therapy does not resolve the lung abscess because of underlying lung diseases such as a bronchiectasis or an area of atelectasis that gets repeatedly infected. In this case a referral to a thoracic surgeon night be necessary to get an opinion whether surgery would help solve this problem. These cases are rare, but when done in the appropriate patient, can be helpful.