Bowel obstruction is always an emergency as the bowel can only survive without blood supply for a few hours, Then it ruptures and the content of the bowel would cause acute peritonitis.

The child or the adult suffering from this condition is in excruciating abdominal pain. The patient needs urgent transportation to the nearest hospital by ambulance. It is there where investigations start right away and the surgeon on call sees the patient.

Symptoms and treatment protocols are different for children and adults, so there is usually a distinction made between them.

See this link for  Small And Large Bowel Obstruction In Children.

Bowel Obstruction In The Adult

See this link for Large Bowel Obstruction In Adults.

Small Bowel Obstruction In The Adult

As indicated earlier, with small bowel obstruction is more acute in its presentation as a lot of fluid can be lost into dilated small bowel loops. There might have been a history of prior surgery and bands of scar formation(= adhesions) have developed. These bands of scarring are made up of tough connective tissue and attach to bowel loops from outside like suction devices that won’t let go. As the years go by the adhesion tissue loses water and retracts thus leading to kinking of the attached bowel loops. This is when small bowel obstruction suddenly develops. 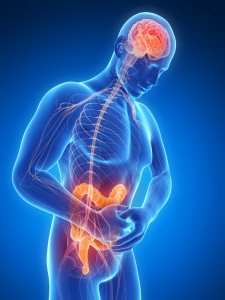 There might have been a few months or even years where the patient felt discomfort after meals. But then it settled again until that one day when it takes off. At that point acute abdominal pain locates in the right and central abdomen. The location depends somewhat on where the obstruction is. Also, in the case of a volvulus there is a bowel loop turning around itself. This cuts off the circulation and makes the symptoms more pronounced. In aa case like this there is a high priority to involve a general surgeon to rescue the bowel. There are only up to 6 hours before the bowel becomes gangrenous and there is a danger of perforation and peritonitis! Abdominal x-rays will often show a ladder-like formation of bowel loops with fluid levels in the standing views. Typically small bowel loops do not contain cancer.

It is important to get an assessment by a surgeon early on in these cases. He performs a procedure called laparotomy (=surgical opening of the abdominal cavity). This usually shows the cause of the obstruction right away. About 25% to 30% of the small bowel obstructions are strangulating (volvulus like). The surgical procedure depends on the findings during the laparotomy and on the status of the patient at the time of surgery. Often there might have to be a period of 2 to 3 hours prior to surgery where the physician decompressed the bowel. This involves placing a naso-intestinal drainage tube first, replacing fluid loss and balancing electrolytes based on blood tests. When the patient can stabilize in this manner, the surgical procedure is safer and the complication rate lower.