Osteoporosis is a disease of the skeletal system where the bone mass is reduced, there is a deterioration of the micro-architecture of the bone and an associated increased fracture risk.

100 years ago very few people developed osteoporosis, a fact that points to the importance of changes in our eating habits, lifestyle changes such as sitting more in the office, in cars, in front of the TV and computers (lack of exercise). As will be discussed under “causes” below, all of these factors combined are responsible for reducing the bone density and leading to fractures. Bone is constantly remodelled through the action of osteoclasts that spot old bone and remove this and through the action of the osteoblasts that are building up strong new bone.

Some facts about bone growth

The medical community seems to be slow in accepting the fact that estrogen is only working on slowing down the action of osteoclasts, but does not stimulate osteoblasts. It does not make sense to push for estrogen replacement as this will only allow poor, more brittle old bone to accumulate, but will not produce new, strong bone that the woman needs for bone health.

Similarly it does not make sense as the drug companies’ advertisements state that the bisphosphonates (Fosamax, Boniva, Actonel, Zometa etc.) would be the “cure” for osteoporosis as they only slow down the osteoclasts, so that the increase in bone density is not due to NEW bone, but due to OLD bone that has not been removed leaving the patient with the same fracture risk when treated on a long-term basis. In addition to this Fosamax has a half-life of 10 to 15 years, it gets bound to protein, gets incorporated into bone for a very long time and stays there, even if the patient stops taking it. This way Fosamax only blocks bone resorption, when the treatment should instead balance bone resorption with new bone building.

Hormones that build up bone

The only known osteoblast stimulators are not drugs, but hormones. The reason is that the body works differently, namely through receptors on osteoblasts for testosterone and progesterone that need to be stimulated before new bone formation can take place. Hormones are the natural way how the body forms bone and balances new bone formation with bone replacement through osteoblasts (Ref. 8). This will be discussed in detail along with important life style changes under “treatment of osteoporosis” (Ref.9). 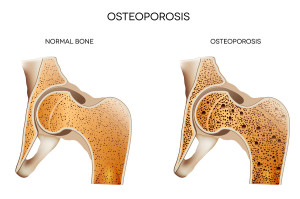 Bone densitometry is aa test that helps to measure the bone density. You find values and normals for bone density in the table  below.

These values are standard deviations and are compared to 35-year old normal controls matched for sex and race.

Between -1 to -2.5 : osteopenia, which means there is a certain lack of calcium in the bones

less than -2.5 : osteoporosis is established

So, if the bone density is less than 2 1/2 standard deviations below the comparative value of a 35-year old normal control, then this is a patient who has osteoporosis (see above).

Here are a few facts about bone growth and osteoporosis (see Ref. 1 and 2).

Some Facts About Osteoporosis and Bone Growth