Gout is an inflammatory joint disease where meat breaks down into purines and uric acid, which causes crystal deposits in and around joints. When a person consumes meat and alcohol together, it makes gout worse. In the middle ages gout was a disease of the affluent and royalty came down with gout.

Gout is a crystal deposit disease

Gout is only one of the manifestations of a faulty uric acid metabolism. Kidney stones are another manifestation. Apart from uric acid crystal disease there are other forms of crystal-induced diseases such as pseudogout. The precipitation of another crystallized salt, calcium pyrophosphate dihydrate (CPPD), causes this. The other name for pseudogout therefore is CPPD crystal deposit disease. These crystal deposits cause an inflammatory arthritis that leads to scarring and a lack of range of motion, if the physician does not detect it early and treats it.

Not everybody can handle uric acid in their system as well as another person. Uric acid is one of the breakdown products of meat. We are all born with slightly different enzyme patterns. However, the person that cannot break down purines as well will end up with too much uric acid in the system until it reaches a critical point of solubility where it precipitates as uric acid crystals. 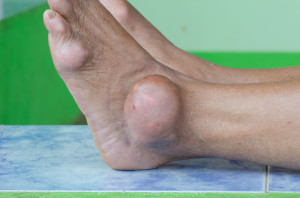 When uric acid levels exceed 7.0 mg/dL (or 0.41 mmol/L) in plasma, a critical point is reached where monosodium urate crystals, which under the microscope look like micro-needles, will be spontaneously deposited in tissue with a lack of blood supply such as tendons, joints, ligaments or cooler tissues such as ear lobes.

Lymphomas and overindulgence of meals may precipitate gout attack

This can also occur in patients who have leukemia, lymphomas, hemolytic anemias or other cancers. In this case the patient overproduces purines because of rapid cell division. Some children are born with an enzyme defect, which leads to uric acid kidney stones, severe gout and kidney damage at a young age. Most cases of gout though are in adults and are often associated with an overindulgence of meals containing large helpings of meat in combination with consumption of alcohol. This might be part of the explanation why males are much more commonly affected by gout than females (ratio of 20:1).