Chondromalacia simply means “diseased cartilage”. With this the popular “cartilage” is not meant, which is called “meniscus” in medical terms. This piece of connective tissue in the knee functions as a shock absorber between the lower end of the thigh bone (called femur) and the upper end of the lower leg bone (called tibia). We are actually talking about the coating of a shiny hard material, called “hyaline cartilage”, directly at the end of the tibia and at the end of the femur that is located within the joint.

This rubs directly on the front part of the lower femoral bone and is often affected with chondromalacia as part of the “patello-femoral syndrome”. This is an important cause of knee pain, which is a common symptom dealt with under this link. There are four stages of chondromalacia that have evolved by observing serial arthroscopies of knee joints first, but have since been found to be present in all joints that have hyaline cartilage as part of the joint surfaces.

Classification of chondromalacia (Grade I to IV)

I : swelling of the superficial layer of hyaline cartilage with breakdown of the network of collagen fibers

II : fibrillated cartilage with surface breaks that extend to the middle layer of the hyaline cartilage

III : breaks in the hyaline cartilage extend to the deepest layer, almost to the depth of the subchondral bone

This type of classification has been useful in the past with the comparison of studies from one center with another or when serial arthroscopies in the same patient showed deterioration over a longer period of time. But since then it has been noticed that this classification system is useful also to describe the degree of chondromalacia. 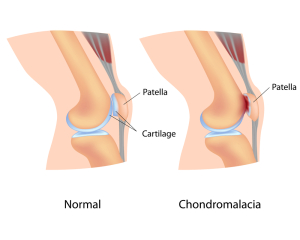 In general, orthopedic surgeons accept more and more that these changes seen during arthroscopy are useful not only for classification of chondromalacia. They can equally document how far along the degenerative pathway of a patient’s joint surface has developed. As a matter of fact there is no question that grade IV chondromalacia is synonymous with established osteoarthritis (or degenerative arthritis, which is a synonym). There is no general agreement yet with regard to the earlier changes of chondromalacia, whether or not to call them “degenerative” or simply “normal aging phenomena”. By the same token, a majority likely would call a grade III chondromalacia an early degenerative change of the affected joint.