Notably, there is a change in the metabolism of the aging joint: before osteoarthritis sets in the cartilage cells, which form a smooth joint surface, are not dividing and they stay at their best performance when compression and release alternate. Specifically, the nutrients and oxygen flow into the joint space and keep the lubrication of the joint originating from the lining of the joint (called synovium) in balance. Certainly, osteoarthritis is a disease of the aging, not by accident, but likely because hormones that supported joints during the younger years are no longer abundantly available in the aging person (see Ref. 8). 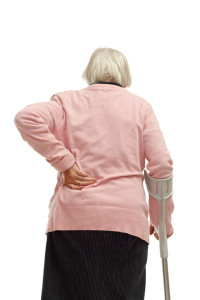 To put it another way, with the beginning of degenerative changes this balance breaks down and the cartilage cells start multiplying producing pathological proteoglycans. Also, cytokines from the osteoarthritic process stimulate bone producing osteoblasts of the underlying bone to produce more brittle, stiffer bone and bone spikes (osteophytes) at the edges of joints.

Frequently this new bone formation is prone to micro-fractures and subsequent callus (new bone) formation. Eventually there is cyst formation underneath the diseased osteoarthritic joint, which X-rays can visualize. Ultimately, the joint dries up and there is loss of cartilage islands. In essence, this leads to joint pain and stiffness and to swelling of the lining of the joint (called synovitis). All in all, in the end stages the synovial membrane can be so thick and edematous that the joint is extremely swollen and baggy, and there might be an accumulation of joint fluid, called effusion. To sum up, eventually bone rubs on bone, which feels like a joint crackling to the patient or the examining hand of the physician who calls this “crepitation”(Ref. 1). Return to the distribution table above to learn more regarding osteoarthritis. 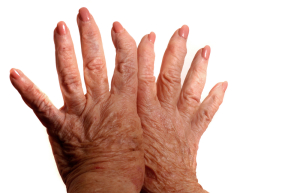 In the last few years it has become apparent that there are two processes that occur parallel.

Secondly, there is an immune process going on where sensitized T killer cells attack the smooth surface of the joint (called “hyaline cartilage”). In this case, what had sensitized the T cells was the fact that bits and pieces of the aging cartilage broke off and were now seen as foreign to the body. However, with supplementation of both undenatured chicken cartilage and omega-3 fatty acids osteoarthritis can be stabilized naturally as is described under this link.

Particularly, a mix of glucosamine and chondroitin has been shown to be beneficial for arthritis: https://nethealthbook.com/news/arthritis-responds-to-glucosaminechondroitin/