Notably, asthma is a very common disease. According to Ref. 3 (page 749) it affects about 15 million people in the US or 5% of the population.

It is important to realize that under the age of 10 years males outnumber females by a factor of 1 1/2 to 2. With this in mind, by the age of 30 years both sexes have about the same probability of getting asthma. In about half of the cases genetic factors and family susceptibility factors play a role.

More than 12 billion $ are spend every year in the US for treatment and disability caused by asthma. Another key point, asthma causes more than 9 million office visits and about 2 million Emergency Room visits in hospitals throughout the US. Additionally, researchers showed that air pollution often is a triggering factor for the development of asthma.

In the same fashion, ozone, car exhausts, smouldering wood fires in the open air and sulfur dioxide from industry all can cause asthma attacks in previously non diagnosed persons. As a matter of fact, researchers found out that susceptible children who were exposed to chlorinated swimming pool water in childhood came down with asthma later in life.

In addition, viral infections (respiratory syncytial virus in infancy, influenza and rhinovirus in older children and adults) can also cause asthma attacks. Also, the worldwide death rates due to asthma has slowly gone up over the years. At present about 3000 asthma patients die every year in the US despite the best modern therapy methods. 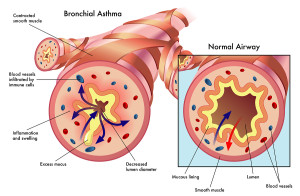 Inflammatory mediators play a big role in these various components of asthma. For instance, the mediation of allergies often involves pathological Immunoglobulines (=Ig), which are antibodies circulating in the bloodstream. One fraction is called IgE and is responsible for the acute asthma brought on by peanut allergies and another IgE antibody is involved in ragweed allergies. Inflammatory mediators such as histamine, leukotrienes and cytokines are all known to lead to leakage of secretions behind the lining of the bronchial tubes and bronchioles increasing the resistance of the airways.

The end result is that the asthmatic with an acute asthma attack cannot move air freely back and forth. With severe cases this leads to an accumulation of carbon dioxide and a lack of oxygen in the blood. Bronchoconstriction has been determined to be due to parasympathetic nerve ending stimulation, which happens by way of reflexes.

Inadequate vitamin D blood levels in many patients with asthma

One of the most important recent detections is that vitamin D plays a major role in preventing asthma. A study at the Children’s National Medical Center in Washington, DC has shown that 86% of Afro-American children between the ages 6 and 20 who presented with asthma at emergency rooms had inadequate vitamin D blood levels. A control group of 6 to 9 year olds who presented for reasons other than asthma (they had no asthma) showed only an inadequate low vitamin D blood level in 19% (Ref. 10). This suggests that there may be genetic differences in the way vitamin D is absorbed and that it makes sense to take adequate vitamin D supplements daily to prevent asthma, particularly in Afro-Americans.

Asthma can improve with relaxation methods as is described here.

6. Merck Manual : Asthma (thanks to www.merckmanuals.com for this link)