Anemia in a simplified translation means a “lack of red blood cells”, but it involves a catalogue of complex symptoms. Just giving it a label without looking for the cause is a serious medical blunder. Hence anemia is like a warning flag. It points to an underlying medical problem, which probably requires an investigation. Here is a general overview of anemia focussing on the different types of the disease and its causes.

The patient may not notice a mild form of anemia, and certainly only laboratory tests will show abnormalities. Severe forms of anemia can produce a host of signs and symptoms. Weakness, dizziness, headache, ringing in the ears (tinnitus), lack of energy, irritability and loss of libido may be part of the symptoms that send the patient to the doctor. Sometimes there are gastrointestinal complaints, jaundice or an enlarged spleen.

The morphological changes, and the special features make the condition of anemia a very complex one. For instance, chronic blood loss causes the microcytic form of anemia. This leads to iron deficiency and to a production problem in the bone marrow. In contrast, the macrocytic form of vitamin B12 deficiency anemia and folate deficiency anemia are another example of anemia with large red blood cells. It comes from impaired DNA synthesis in the bone marrow leading to blown up appearing red blood cells (“macrocytic”). Overall there are insufficient numbers of them circulating in the blood because of a reduced production in the bone marrow. It seems like health professionals associate folate deficiency with celiac disease, pregnancy, malabsorption of nutrients and alcoholism.

Other forms of anemia

Other forms of anemia can have their origin in bone marrow failure. But this can certainly also stem from chronic infection or inflammation. It can also be the result of a paroxysmal cold hemoglobinuria. This occurs after exposure to a cold or an infection with syphilis. Hereditary forms include hereditary spherocytosis. But there could be inborn or acquired defects (sideroblastic anemia.) It seems like some specific anemias are more common in certain population groups. As an example, sickle cell anemia is almost exclusively found in blacks.  Thalassemia is frequently found in patients of Mediterranean descent. Therefore, due to the complexity of the topic of anemia it is imperative to seek a referral to a hematologist. This is the specialist who assesses and treats disorders of the blood.

Blood tests give information about the severity of the condition and hence are the data source, which are needed for the proper diagnosis. In most cases the blood is collected in the laboratory by venipuncture. The so-called CBC, which stands for “complete blood count” is the basic test, which includes information about the composition of the blood. It includes a count of the white blood cells, the red blood cells, the white blood cell differential count, hemoglobin and hematocrit, as well as information about platelet spread. It seems like this test is valuable, as it probably detects anemia, infection, bone marrow failure and adverse drug reactions. Also, blood smear examinations can help with the detection of other abnormalities. This test is important to check the appearance of red blood cells. Even if the CBC was normal, other abnormalities like thrombocytopenia and others can be detected.

Automated technology makes test results available in about 30 seconds. Red blood count and reticulocyte count give more details about the red blood cells. Reticulocytes is the name of the young red blood cell population. An increased count in the young cells (reticulocytosis) is especially noticeable in hemolytic anemias and in acute and severe bleeding. Electronic and automated technologies have opened up new diagnostic possibilities. The physician can find variations in the shape of cells, portions of disrupted cells, membrane alterations and fragments of red blood cells. Tests for red blood cell fragility (osmotic fragility) are another tool, and hemostasis (bleeding time, prothrombin time and others) can provide further insight. 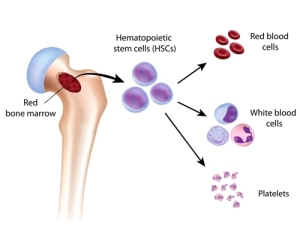 The techniques of bone marrow aspiration and biopsy has introduced new possibilities. It allows a direct observation of activity and maturation of the red blood cell precursors. They measure the amount of distribution, the cellular pattern of iron content or abnormal maturity of the cells. Bone marrow aspiration and biopsy are are relatively simple tests the doctor can do it as a single procedure. This test should be part of the early diagnostic tools in suspected hematological diseases. These procedures typically are ordered by a hematologist.