Psychotic Disorder Due To Medical Condition

Usually a psychotic disorder due to medical condition involves hallucinations or delusions that are very prominent.

These are thought to be produced by the underlying medical illness that leads to a physiological change of the brain metabolism to cause these symptoms.

Common such underlying medical conditions are: thyroid disease with too much or too little thyroid hormone production; brain tumor; stroke; infection of central nervous system; epilepsy; liver or kidney disease; systemic lupus erythematosus with central nervous system involvement; severe fluid and electrolyte disturbances; metabolic conditions affecting blood sugar or oxygen content of the blood. There are more, but these illustrate the point. For instance, in temporal lobe epilepsy it is common to have the occasional patient develop religious delusions. 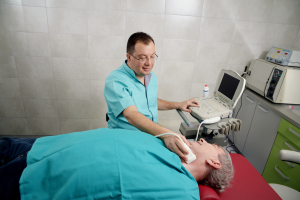 This is directed at normalizing the underlying medical condition. For instance, when thyrotoxicosis due to a thyroid adenoma has caused a psychosis, and the thyroid producing adenoma is removed surgically, the psychosis disappears as the thyroid hormones normalize.