Schizoaffective disorder is a psychotic disorder which lasts at least 1 month or longer and where a mood disorder is present for a substantial portion of the total duration of the schizophrenia, which is present at the same time.

For instance, a patient may present with schizophrenic symptoms of hallucinations, delusions and others, which are usually present first.

Then there would be a period of time when depressive symptoms are superimposed for perhaps 3 months and eventually the schizophrenic symptoms would abate perhaps after 5 months of total duration. This would be an example of a bout of schizoaffective disorder, which resolved. However, for some patients schizoaffective disorder lasts for several years and even several decades. Typically it starts in early adult life. Instead of a depressive mood disorder a bipolar mood disorder may be present.

First degree relatives of patients with schizoaffective disorder are at an increased risk to develop either schizophrenia or a mood disorder. 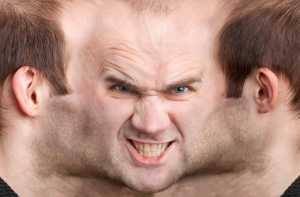