Symptoms of schizophrenia differ a fair amount between schizophrenic subtypes and not all of the symptoms below are present in every patient. A patient with persecutory thoughts will interpret all of the actions around him as meaning that something or someone is after the patient. For instance, when a schizophrenic patient witnesses a scene on the road where one worker is yelling to another worker to drop a load of poles from a truck, where the intention is to build a fence at the side of the road, this would be interpreted as : “He said to the other guy: drop everything and let’s chase after me…”

Another patient may have auditory hallucinations (hearing voices that are not really there), where everything that is happening is commented on. In this patient a soft voice that she trusts may tell her: ” You know , you have taken these pills long enough. Don’t you think you should give your system a break?” The patient often is aware that these voices are not really there, but they are incorporated into judgments, decisions and actions. So, this patient did stop the pills and within 2 days she ended up in hospital with a florid psychosis and flare-up of her schizophrenia, which lead to a 4-week psychiatric hospitalization and a follow-up program, where the psychiatric nurse at the outpatient psychiatric clinic gives her an injection with a long-acting antipsychotic medication every three weeks. Hallucinations can happen in all the senses: the auditory ones are the most common, but visual hallucinations are also fairly frequent, less frequent are hallucinations that affect smell, taste or tactile sensations. What the patients are not aware of is that all of these sensations are generated within their own brains.

Bizarre delusions are another symptom complex. This is best told in a story:

Fred (not his real name) is 30 years old and has been diagnosed with schizophrenia 2 years ago. He was given medicine, which he suddenly stopped taking, because he thought that the police “was after him” and that they have given the pharmacist these pills to be able to home in on his body. He went to town in his car, but every time he saw a police cruiser, he turned into a side street to escape from them. He then made a U-turn and went back to the main street towards town. Eventually this behavior was suspicious to a police officer and he followed Fred until the car came to a stop. The police officer could not see any driver when he approached the car, as Fred had quickly crouched in front of the back seat, where he knelt on the floor hiding his head under both of his hands. He did not move from this position, not even when two police officers carried him away into a police cruiser. They brought him to the nearest hospital, where his psychiatrist happened to be on call. The bizarre delusion of thinking that police would be after him made him behave in strange ways. At the end of the chase he was convinced that police would shoot him and he resorted to another schizophrenic symptom, called “catatonic rigidity”. He was convinced that if he stayed in this posture, he would be safe from police. In this case this was only a temporary symptom, which fitted into the bizarre delusional thought system. But there are patients who have catatonic schizophrenia, where various bizarre postures such as the one described would be the main physical symptoms.

Other symptoms of schizophrenia are disorganized thinking and speech. The person interacting with the patient will notice that the topic is frequently switched, before the thought has been expressed completely.

There may not be any explanation for his behavior or the patient may later explain to the psychiatrist that he thought that this woman was a former teacher of his who gave him corporal punishment for several years and he thinks that this caused his mental illness. If the psychiatrist were to do research of the school records, there probably was never such a teacher or such corporal punishment. However, for the patient all of these thoughts, beliefs and behaviors “are very real and make sense”. 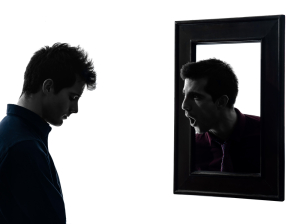 The schizophrenic patient finds it difficult to express emotions and this is apparent during a conversation. The face stays unresponsive, does not express emotion, there is poor eye contact and reduced body language. The affect is flat.

The speech is poor, there are expressive problems with only brief, empty replies. The decreased fluency and productivity of speech seems to reflect the thought inhibition that is going on inside. As normal people can also go through similar phases, this needs to be observed over a period of time and by interviewing relatives and friends that have close contact with the patient.

The schizophrenic patient finds it difficult to initiate a project, plan it and see it through to completion. This is a common occurrence in a person’s life. But for the schizophrenic this becomes an insurmountable task.

The lack of will and the inability to make a decision is what is meant with “avolition”. Because of this symptom of schizophrenia the patients may sit there for a long period of time and may refuse to start new projects, even though on another occasions they had indicated that this is what they wanted to do. For the same reason the y appear to not want to participate at work or in social situations. According to Ref.2 the patient must have at least two of the 5 major categories of symptoms for 1 month or more to be called”schizophrenia” and the symptoms must persists for at least 6 months (or at least 1 month, if treated successfully).