A patient with body dysmorphic disorder is preoccupied with a defect in appearance.

This can be a real defect or an imagined defect. When it is real it usually is a slight variation of the normal or a slight physical anomaly. However, the important part is that the patient’s concern is markedly excessive.

This preoccupation with this problem causes the patient marked distress and affects the social, occupational and other functioning in every day activities. In the case of dissatisfaction regarding body shape and preoccupation with weight loss the patient would better be classified as “anorexia nervosa”, which is dealt with under “eating disorders”.

Common concerns are: preoccupation with the size or shape of the nose, the eyes, the mouth or the eyebrows. The breasts may be too large or too small, the hips may be too prominent, the buttocks may be too pronounced.

However, when the patient asks a relative or friend about their opinion, the patient does not accept the advice and starts the preoccupation again.

Hours every day are literally spend looking at a mirror or researching opinions of others, who do not take long to avoid the patient or get angered by this behavior. Although initially the frequent checking of the “defect” might have been reducing the anxiety about it, as time goes on, it becomes clear that the more the patient checks the “defect”, the more anxious he or she becomes. Some patients are convinced that the “ugly body part” is very fragile or could be damaged any time.

Patients may want to hide as they do not want to get caught checking themselves all the time, but as time goes on find it more and more difficult to suppress the checking. Eventually it affects their social functioning and leads to social isolation as they do not participate fully at work, at home or with friends.

They may find it difficult to keep jobs or they work in jobs that are well below their capabilities. They may get into marital problems or find themselves faced with a divorce. Not infrequently they may develop a major depression with suicidal ideation or attempting suicide. At this time the family might learn for the first time about the underlying disorder as the patient was hiding it successfully from them up to that crisis.

Reliable statistics regarding body dysmorphic disorder do not exist, as patients cover up very often.

However, it may be more common than thought of in the past. Men and women are affected with this disorder about equally. It begins usually in adolescence, but it may not be detected for several years because of the reluctance to share this. The preoccupation with a body part can wax and wane, but it tends to be chronic in nature. 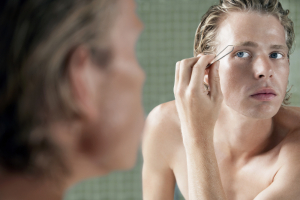 This disorder must be differentiated from normal concerns about appearance. In the body dysmorphic disorder excessive time is spent constantly checking, while with a normal concern about appearance this is dealt with very quickly and does not interfere with other life functions.There might be other mental disorders present that have similar symptoms such as obsessive-compulsive disorder. In delusional disorder, somatic type, an imagined defect( that in reality is not there) can be so vividly imagined that the patient actually believes the delusions. Major depressive disorder was mentioned above. If this gets superimposed, the important symptoms to watch for are suicidal thoughts. Other mental disorders are anorexia nervosa, avoidant personality disorder , social phobia and gender identity disorder.

Unfortunately, the longer the patient waits to seek treatment, the more difficult it is to treat as the thought patterns and habits that have been formed over the years are much deeper entrenched. The patient should be referred to a psychiatrist for proper diagnosis. Associated depressive illness needs to be treated with an SSRI antidepressant. Clomipramine (brand name: Anafranil) and fluoxetine( brand name: Prozac) have been used with a certain amount of success. Other useful therapeutic measures are self help support groups, supportive counseling and groups that focus on building up self-esteem.