Schizophrenia treatment is presently suboptimal.The effectiveness of treatment is determined by how fast the patient presents to the care of the psychiatrist or physician.

Side effects of conventional medication

These medications are not without problems. One of the unpleasant side-effects is motor restlessness(=”akathisia“), which often leads to terminating therapy by the patient.

Another more severe side-effect is tardive dyskinesia, which occurs in 5% per year of antipsychotic medication use and in about 1%-2% of these it is severely disfiguring the face. Tardive dyskinesia can lead to permanent involuntary movements of the muscles around the mouth and the eyes. The jaw and the tongue may also show involuntary movements and in time this leads to a disfigured look of the face, often with asymmetries between right and left. Unfortunately, withdrawal of the antipsychotic medications will often not improve the tardive dyskinesia. Often expensive lifelong Botox injection therapy every 6 to 8 weeks is required to alleviate some of the effects of this devastating dyskinesia.

A more rare, but very dangerous side-effect is the neuroleptic malignant syndrome. It happens in about 3% of patients that were started on antipsychotic medications, usually right in the beginning of starting therapy. It likely is caused by the blocking of central dopamine receptors. Symptoms consist of muscle rigidity, a high fever, fast heart beat, high blood pressure, rapid breathing and a change of consciousness. It is a severe syndrome of autonomic dysfunction. The blood tests are very abnormal with a severe acidosis, elevated CK enzyme levels( a muscle enzyme), myoglobinuria and others.

This syndrome has a high mortality rate of about 25% to 30%. Treatment for this requires admission to an Intensive Care Unit in a hospital. The antipsychotic medication is withheld. Dopamine agonist therapy with bromocriptine (brand name: Parlodel) is used in combination with supportive measures.

Other side-effects are common such as extrapyramidal side-effects that mimic Parkinson disease. Symptoms can include trembling of the hands, shakiness of the upper extremity muscles as well as muscle rigidity, cogwheel phenomenon when testing muscle mobility and balancing problems. Benztropine (brand name: Cogentin) is helpful in treating this. 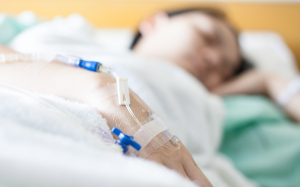 However, they have again their unique side-effects. Clozapine, for example, leads to agranulocytosis in 1% of cases. This is a serious side-effect where the stem cells of the bone marrow get poisoned and the patient dies of serious infections against which nothing can be done. On the other hand in 99% of the cases Clozapine can do wonders in stabilizing a schizophrenia, which could not be stabilized before with the conventional medicines.

There is a network of support services in many communities, which is very useful in helping patients maintain their independence at home for as long as possible. Patients do much worse, if they do not interact with others. Part of such support services are also regular mild exercise classes or such activities as walking clubs or swimming groups.

When the chronic schizophrenic patient has problems coping in the regular job world many communities have now sheltered job situations that are supervised by staff who have experience with patients with schizophrenia. Self-help groups exist and are growing in number. More needs to be done, but there are limits of government agencies and volunteers. However, when the safety net fails, the “alternative” for the chronic schizophrenic is to join the street people or to end up in one of the homes.

Many become disparate, depressed and suicidal. The physician may have to add an antidepressant medication to the other medication. At times the psychiatrist may decide to give a treatment course of electroconvulsive therapy, which has a good response rate and avoids the accumulation of side-effects. Although family support is excellent and helpful, often family members are afraid and hurt from what happened in the past before treatment was instituted, and they may want to avoid a closer contact.

Schizophrenia is one of the major psychiatric illnesses and more research is needed. It likely will be some time before more effective, less invasive therapy will be introduced. Some hope may come from the eicosanoid research( essential fatty acid metabolism research) as the brain is made up of about 1/6-th of its mass as polyunsaturated fatty acids with the highest concentration of ecosanoids in the body.

Dr. Hoffer, a Canadian psychiatrist pioneered alternative schizophrenia treatments in the 1960’s. This was followed by the psychiatrist Dr. Pfeiffer in the US in the 1970’s. Both of their findings are reviewed in detail by Dr. Walsh (Ref.10). Essentially what these researchers and clinicians have been saying is that any effect that can be achieved with drugs can also be achieved with natural substances with the same effect, but less or no side-effects.