Tetanus is a common infection, which enters into the skin through open wounds, skin abrasion, burns or by injection with dirty needles containing tetanus spores.

The bacillus has the name Clostridium tetani. It causes “lockjaw”, which is the common other name for tetanus. Worldwide tetanus causes about 50,000 deaths every year.

The tetanus bacillus comes in two forms, an elongated shape, which is the round vegetative form and a spore, which is the storage form of the bacillus. It is called Clostridium tetani. The tetanus spores are very resistant to destruction. They are ubiquitous in soil, on plants, in dust, throughout the gastrointestinal tract and in animal feces. Tetanus grows best in anaerobic environments meaning that it likes deep wounds, abscesses, crushed muscles and ligaments, where there is no oxygen present.

What makes people sick with tetanus is a toxin (an “exotoxin”) that the bacilli release as they multiply. This exotoxin, called tetanospasmin, binds to a specific membrane in the nerve synapses (=nerve switches). Specific inhibitory transmitter substances are blocked in this manner and the net result is an overabundance of stimulatory impulses through the synapses. This leads to convulsions, muscle rigidity and when the chewing muscles are affected also to “lockjaw”, which explains this popular alternative name for tetanus.

Tetanus in the newborn (called “tetanus neonatorum”) still kills about 500,000 children yearly in the development countries. It is entirely preventable through a good immunization program of both pregnant women and newborns.

Tetanus neonatorum occurs in children born to mothers who have not received tetanus toxoid vaccinations. When a layperson during a home delivery uses non-sterile equipment to cut the umbilical cord tetanus spores can cause tetanus infection in the baby. The person who applies dressings to the umbilical stump may contaminate the wound with materials that contain tetanus spores. This may occur during a harmless rituals surrounding the birth. The incubation period is 6 days. When the baby was feeding well initially, then stops feeding and then develops facial rigidity (“trismus”), generalized muscle spasm, backwards arching (“opisthotonus”) and seizures, this is highly suggestive of the diagnosis of tetanus.

The common entry into the body is via a wound, which can be just a scrape or an abrasion. The tetanus spores that enter into the body change into the vegetative bacillus form and seek nerve endings where they migrate back up into the Central Nervous System. The toxin then finds its way either directly via the nerves or indirectly through the blood stream into the peripheral motor synapses as described above where the tetanospasmin blocks the inhibitory impulses and leads to widespread prolonged and severe muscle spasm.

The incubation between the entry into a wound to the first jaw stiffness (the most common symptom) is 5 to 10 days on average. The patient is restless, develops problems swallowing, the neck turns stiff as do the arms and legs. The facial muscles get into spasm with a pasted-on smile and raised eye brows. The abdominal muscles and back muscles get into a rubber-like spasm (=”opisthotonus”). Even the body sphincters get into spasm leading to urinary retention and constipation. The body is on a hyperalert state where noises, or the jarring of the bed can lead to profuse sweating and a generalized tonic spasm in the whole body.

Other symptoms of tetanus

Headaches and fever can set in, but the mentation stays clear to the later stages of the disease. After repeated spasms coma can set in. This might be due to respiratory distress as the patient has also chest wall rigidity and vocal cord spasms interfering with breathing. Reflexes are very brisk. There is often a pronounced increase of the white blood count. Involvement of the cranial nerves is common in tetanus of children and is called “cephalic tetanus”. This is common in India and Africa. It can lead to deafness should the patient survive the disease.

In case of bacterial or fungal superinfection of the lungs (pneumonia), symptoms of cough and chest pain as well as accentuated breathing problems would be present with the usual physical findings on examination of the patient.

If there is a history of a wound followed by muscle stiffness or spasm in a person who did not have a tetanus immunization, the physician has to think that tetanus could be the likely diagnosis. In the case where mentation stays clear, but the above mentioned signs and symptoms occur, yet a sample of cerebrospinal fluid (=CSF) is entirely normal, the physician needs to think “tetanus”. Antipsychotic medications for schizophrenia or psychosis can have side-effects that are similar to tetanus, but this can quickly be ruled out with a profile of all the medications that the patient is taking. If there is clinical evidence of pneumonia, X-rays are obtained and sputum cultures or cultures of suctioned secretions in the case of an intubated patient would be obtained.

The outlook is poor with 50% of patients with tetanus dying of the disease. The key is early detection. It appears that the prognosis is poor, if the time interval between the wound and the first spastic symptoms is short and the symptoms get rapidly worse. Children and old people do much poorer than other age groups. Often bacterial superinfections with pneumonia or aspiration pneumonia in an intubated patient led to complications (abscess formation, septicemia) and death. 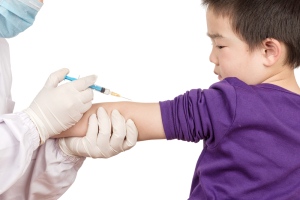 The most important therapeutic step is to provide adequate airways. This often may include intubation and possibly a tracheotomy (=opening through the trachea) with a ventilator machine attached to the breathing tube. It is not uncommon that the patient undergoes a 2 or 3 week intubation an Intensive Care Unit setting. The physician gives antitoxin in form of human hyperimmune serum.

A surgeon has to do wound debridement, removal of dirt and of dead tissue, and exposure and revision of penetrating wounds (knife, gun shot wounds). The physician treats hyperirritability with benzodiazepines and other medications. Antibiotics are also given to prevent further multiplication of the tetanus bacilli, but the already released toxin will not be reduced by this. Tetracycline and penicillin are the drugs of choice; metronidazole (brand name: Flagyl) in high doses is also recommended.

An ounce of prevention is worth more than a pound of cure. Tetanus toxoid vaccination is a case in point!

•I described above how devastating tetanus as described above is, and how safe the toxoid vaccine has been for the last several decades. It actually is negligence, if someone wants to influence somebody not to maintain a lifelong vaccination program against tetanus for an irrational fear of the vaccine.

•Consider how widespread tetanus spores are in soil and dust and how resistant to disinfectants they are. Tetanus spores sprout in minor little scratch wounds, where they release the toxin rapidly.

•Those who received vaccination against tetanus toxoid have immunity for 10 years or more and a booster shot extends this immunity for an equal length of time.

• Go for your vaccinations, I am going for mine!

The physician starts active immunization parallel to all of this in order to get a lasting immunity down the road. Adsorbed tetanus toxoid is given as a dose of 0.5 cc subcutaneously. 1 and 2 months after the initial dose further booster doses are given. This is an extremely effective and safe vaccine. Every child and adult should keep their immunization status up to date.