Erysipelas is a skin infection similar to cellulitis, but where the lymphatic vessels that drain this infected skin area are also involved by the infective process.

It is mostly due to an infection with group A beta-hemolytic streptococcus. As athlete’s foot is a common fungal infection in the web space between the toes, a superinfection with the type of streptococcus just mentioned can then cause suddenly erysipelas in the lower leg or the entire leg.

There is often a fever with chills and a feeling of sickness as at the same time the typical skin rash develops. This consists of a well demarcated skin area where the infection is located. The skin in this area is swollen, red and shiny, painful to touch and there may be a raised border where the active spread occurs.

In this area there might be a red line. The central part of the infected area tends to clear, while the periphery spreads rapidly. These type of skin infections tend to occur in the face and in the legs, and to a lesser extent in the arms. Here is an example of a picture of an erysipelas (thanks to www.sciencephoto.com for this image).

The diagnosis is largely made clinically and it is rare to catch the offending bacterium unless a blood culture is positive. Blood tests usually show an elevation of the white blood cell count (leukocytosis), the sedimentation rate is elevated and the anti-streptolysin titre (AST titre) is rising when a baseline titre in the beginning is compared to the titre 1or 2 months after the recovery.

In the acute phase an injection with penicillin G (1.2 million units) is given intravenously four time daily.

After 1 1/2 to 2 days this is then followed by penicillin or erythromycin, capsules or tablets by mouth. If there is resistance to treatment with these antibiotics, the clinician will switch to cephalexin or cloxacillin. In case of an underlying fungal infection between the toes this would also be treated with antifungal medication to prevent a recurrence of the same problem. As there can be a certain amount of scarring left in the lymphatic drainage, there is often a higher recurrence rate of erysipelas in the same region. Early antibiotic therapy is essential and the physician often leaves a prescription for the next such infection with the patient so that early intervention with antibiotics can be exercised, which will prevent further scarring (Ref. 3, p. 796 and Ref. 2, p. 471). 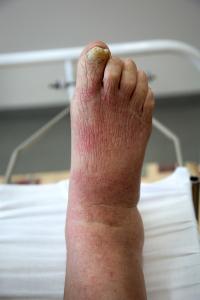