In medical terms this condition is known as necrotizing fasciitis or necrotizing cellulitis. It is caused by the same bug, Streptococcus pyogenes, which belongs into the group A Streptococcus type of bacteria and is also the cause of cellulitis. The difference is that with cellulitis the infection is on the surface of the skin.

With flesh eating disease it is in a deeper skin layer where the anatomy is softer.

Once the bacteria have broken through the protective skin layer they can spread very rapidly due to protein digesting enzymes eating their way through the fascia, which is located just below the subcutaneous tissue of the skin, and into the muscles and tendons. Once the fascia is liquefied with these enzymes, the bacteria have ideal growing conditions and multiply rapidly. It is extremely important to recognize that hours count in terms of early detection and swift initiation of surgical and intravenous antibiotic therapy. In the beginning there might be a deep skin ulceration like on the image  depicted here. But in the next hours or 1 to 2 days this type of skin ulceration when untreated could turn into the deep open wound in the lower leg region as shown in the link below. 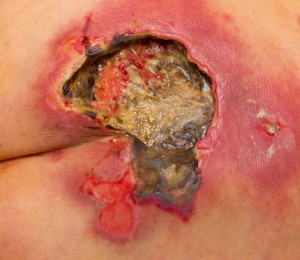 There is usually acute localized pain in the area where the infection is localized. The overlying skin is swollen, red colored and hot. With further deterioration there can be blistering and the color gets more of an angry looking, violet tinged appearance to it. With touching there is sometimes a grating or crackling sensation that can be felt (medically termed “crepitation”).

There is a fever, fast heart beat and the patient may have a change in the level of consciousness from initial drowsiness to confusion and finally coma. Blood pressure drops due to loss of blood volume into the infected area. Here is a link to a site with a picture of flesh eating disease at the ankle.

Even with the best intervention there is a mortality rate of 30%! It is important to get tests done rapidly and then to start therapy right away. X-rays often show gas formation from bacteria in the soft tissues. If it appears that there is pus under pressure, it is important to have a surgeon open this area for adequate drainage. Prior to that the physician might take a needle aspirate for Gram staining, or a swab taken during surgery can be sent off for that. Routine blood tests are taken for kidney and liver function tests as well as a coagulation screen to rule out other diseases and to gage the severity of this condition.

Intravenous fluid replacement is given as large quantities of fluid have been lost into the infected region. The surgeon will do a generous exploration and wide opening of pus pockets to allow all of the infection to drain. In some centers where hyperbaric chamber treatments are available less debridements are necessary and better survival has been achieved.

At times an arm or a leg has to be partially or totally amputated just to save the person’s life. This is an area of medicine, which is cruel and gruesome! Nevertheless, great progress has been made in the last decade in treating this life threatening condition. Apart from surgery, intravenous antibiotic treatment is given, which usually consists of gentamycin, clindamycin (often in combination) or cefoxitine alone. Later the antibiotic is switched based on sensitivity results from the lab testing (Ref. 3, p.797 and Ref. 2, p.472).