Small rickettsia-like bacteria cause this infection that can only multiply inside two special white blood cell types, namely monocytes and granulocytes.

In the cycle of infection brown dog ticks are function as carriers, although we do not yet fully know where the main reservoir for the Ehrlichia species is. The medical literature describes two types:

The American ehrlichiosis is a non specific flu-like illness, which starts 1 to 3 weeks after a tick bite with fever, lack of appetite, muscle aches, headaches, nausea and vomiting. Occasionally the onset is more abrupt and symptoms more acute. In the more acute form a life threatening condition, called disseminated intravascular coagulation (DIC), is developing.

This leads to lack of clotting, a loss of platelets and possible shock and death, if not recognized early and treated successfully. Liver function can also be affected and deteriorates, if the disease is more severe.

The clinical history of tick bites followed by the signs and symptoms mentioned above, suggests the diagnosis clinically.

Blood tests are then done to confirm or rule out the disease. Low platelet counts (thrombocytopenia), low white blood count (leukopenia) and elevated liver enzymes( transaminases) in this setting point to this diagnosis. The specific tests are either a serological test specific for ehrlichiosis showing the bacterium in the monocyte (see arrow) or a genetic test involving a polymerase chain reaction, which allows earlier diagnosis of this disease before DIC sets in. 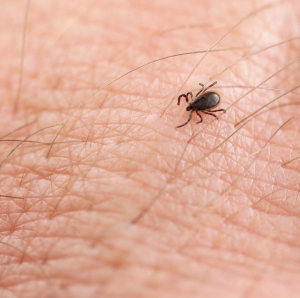 Ehrlichiosis (Tick, But No Bite Yet)

Treatment is given based on the clinical presumptive diagnosis, as early treatment will quickly eradicate the disease and prevent complications such as DIC, shock and death. Tetracycline or doxycycline is the treatment of choice except for pregnant women, where chloramphenicol is the accepted alternative. There is a small risk of agranulocytosis from chloramphenicol, but most physicians agree that the risk of not treating the ehrlichiosis is greater than the risk of agranulocytosis.