Nail fungus or ringworm can be confined to just the nails. Another medical name for that is “onychomycosis” or “tinea unguium”, which means tinea infection of a nail.

When scrapings of the affected nails are cultured or examined under the microscope after special staining techniques, it turns out that Trichophyton is commonly found. The toe nails tend to be more affected than the finger nails. The nails get thickened, sometimes spongy and nail plates can separate. This is seen in this nail fungus image where nail fungus can be seen. The skin specialist may have to do special tests to separate onychomycosis (nail fungus) from psoriasis. In many patients with longstanding psoriasis there is pitting of the nails and there is quite a remarkable difference when you concentrate on watching the details. This distinction is important as treatment for nail fungus is lengthy and side effects at times can be significant. If pitting of psoriasis would be treated by antifungal agents, no change would result even with prolonged treatments. 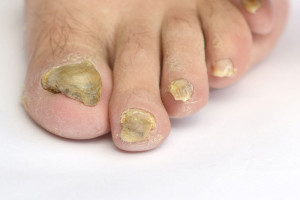 In the past this was treated with griseofulvin, but the success rate was less than 20%. In the last few years better antifungal antibiotics have been developed, which get incorporated into the nail material thus providing a higher cure rate. Itraconazole (brand name: Sporanox) and terbinafine (brand name: Lamisil) have to be given for a period of 4 months to get incorporated enough into the nails. Sporanox is given at a dose of 200mg twice per day 1 week per month, Lamisil is given 250 mg daily. As perfusion of finger nails is better than in toe nails, treatment for finger nail fungus can be shortened to a 6 to 8 week course.