Physicians think that bacteria cause this form of skin infection through the release of enzymes, which allow the infection to spread horizontally and invade the skin to a significant depth (several millimeters).

The main bacterium that causes cellulitis is Streptococcus pyogenes (a group A beta-hemolytic streptococcus). Bacteria release such enzymes as streptokinase, hyaluronidase and others. This helps to spread the infection really fast.

Occasionally Staphylococcus aureus can also produce cellulitis, but the spread occurs more slowly as this bacterium produces less enzymes. With diabetic foot ulcers or skin infections in poorly circulated regions (smoker’s leg) gram-negative bacilli such as Escherichia coli or Pseudomonas aeruginosa are often found. Infection with these bacteria can become problematical as antibiotics will not diffuse into the deeper poorly perfused tissues and septicemia can develop easier.

Prior to the infection there often is a skin breakdown from trauma, a fungal infection or an ulceration,like in a pressure ulcer or diabetic skin ulcer.

The skin around this area becomes red and hot. The skin in that area gets puffed up (edematous) and as the skin is under tension, it resembles the peel of an orange. French physicians coined the term “peau d’orange” (orange skin) for this sign. Sometimes little blisters form within this infected skin that can pop open. Fevers and chills and a fast heartbeat can occur as well, which are signs of systemic reaction to toxins that circulate. Here is a link to a website site that contains an image of cellulitis.

The physician diagnoses a clinical condition by the history in combination with the clinical findings. With a laceration of the skin, a wound infection of the margins and cellulitis in the subcutaneous tissues can develop. Sometimes, even after suturing of  the laceration an infection can occur. In case of a pussy discharge this is swabbed and sent for bacterial cultures and antibiotic sensitivity testing. Rarely are blood cultures taken, which occasionally show the bacterial cause of the cellulitis. If treatment is not started soon with appropriate antibiotics, there is a good chance that the lymphatic drainage channels will get scarred up and this will make the skin area more prone to future infections. However, this is rare with antibiotic treatment. 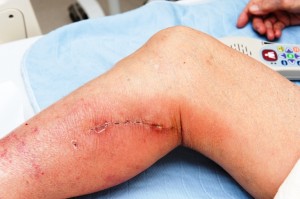 In mild cases PenV is the treatment of choice as Strept. pyogenes is very sensitive to this (usual dose is 250 to 500mg four times daily for 7 to 190 days). Alternatively 1.2 million units of benzathine penicillin given intramuscularly just once will prevent problems with compliance of taking the pills regularly. Those who are allergic to penicillin can be treated with erythromycin or clindamycin alternatively. When the physician who treats a patient with an infection suspects Staphylococcus aureus, he uses dicloxacillin for mild infections and nafcillin or oxacillin for severe infections. E.coli and Pseudomonas infections require intravenous combination therapy of piperacillin and tobramycin until the culture reports come back from the lab and then the antibiotic would be changed accordingly. Within a few days the patient usually does well on such a regimen.

However, occasionally a methicillin resistant Staph. aureus can cause the cellulitis, in which case vancomycin is the drug of choice and this has to be given intravenously. The physician has to treat concomitant fungus infection (for instance athlete’s foot from tinea pedis) as well to avoid future recurrence of cellulitis (Ref. 3, p.794).