Infestation by lice or “pediculosis”, as is the medical term, has a double significance as a medical disease. First, it is causing an itchy skin disease, which affects the scalp, body or genitals depending on which type of louse it is. Secondly though the lice are carriers of other diseases such as typhoid fever, trench fever and relapsing fever.

Control of infestation by lice has traditionally been one of the major Public Health concerns.

There are three types of lice in humans:

2. Pubic lice due to Phthirus pubis.

These different louse types have over the centuries adjusted to specifically thrive in the areas to which they have adapted. Below thre is a brief outline of some of the characteristics of the various types of lice.

Characteristics of the various types of lice

This is common among school children as the transmission in a classroom with many school children is easy because of crowding. Transmission is by personal touching, by sharing of combs or hats. Apart from being localized in the scalp the head louse (thanks to www.nlm.nih.gov for this image) can also live in eye brows and eyelashes as well as beards. The lice deposit whitish oval shaped nits (each containing a louse egg) around the hair. After several days to 2 weeks newly hatched lice invade the scalp and then form new nits again. 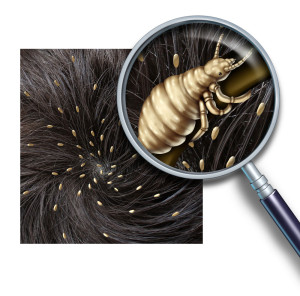 Head lice are a common nuisance

As the body is very sensitive to the foreign protein from the lice, an irresistible itch (pruritus) develops in the scalp, which leads to intensive scratching to the point where open scratch sores develop that can get secondarily infected by skin bacteria. The diagnostic test for lice is the finding of nits that are firmly attached to the hairs and cannot be dislodged like dandruff flakes can. In children there is often a generalized nonspecific skin dermatitis on the body, even though the lice are confined to the scalp. This is called an “id”reaction and seems to be an allergic phenomenon.

With good hygiene body lice are rarely seen. However, with poor hygiene lice can multiply in the seams of underwear that is worn close to skin. Nits can be detected on body hair and in fabric of clothes that are not washed. Common sites for developing itchy lesions are the abdomen, the buttocks, and the shoulders. The physical findings can be mini puncture wounds (thanks to www.afpmb.org for this image) from direct louse bites, scratch marks (possibly with bacterial superinfection such as impetigo or cellulitis), urticarial rash and furunculosis.

The pubic louse (thanks to entoplp.okstate.edu for this image) is transmitted sexually through intimate genital contact. Like in the other areas described above the louse tends to live in the skin and hair of a confined area, in this case the anogenital region. In hairy people some of the lice may also live in other areas (thanks to aapredbook.aappublications.org for the image of lice in eye lashes), but the highest concentration of lice will still be found in the hairs of the anogenital areas. Nits can be found at the origin of the hairs close to the skin. One sign to look for are tiny dark brown spots of louse feces on underwear where the anogenital region touches it. Skin breakdown from chronic itching and scratching with subsequent bacterial or fungal superinfection is common.

Like in scabies the treatment of choice is 5% permethrin cream (brand names: Kwellada cream, Kwellada lotion, Nix Dermal Cream), which is applied and left in place for 6 to 12 hours before it is washed off.

In recent years some resistance to permethrin has been observed. In these cases it is suggested to use the experimental drug ivermectin as a single dose. In the past lindane was used, but this has neurotoxic side-effects, which are not tolerable and this therapy has no place with a number of newer drugs on the market that a dermatologist would have access to. If cases are difficult to treat they should be referred to a dermatologist (=skin specialist).

An ounce of prevention is definitely worth more than a pound of cure with respect to louse infestation. Children have to be taught to practice good hygiene, to have a bath or shower daily, to not share combs, hats, clothes, brushes, make-up etc. Responsible sexual behavior will prevent pubic lice transmission and also other sexually transmitted diseases including venereal warts. Once there is a case of louse infestation in a family member all of the remaining family members should also be treated for prevention of further infestation.