Nail infections in the fingers or toes are very painful and are called paronychial infections.

The cause of these infections are several bacteria, viruses or fungi infecting the nail bed. Common bacteria are Staphylococcus aureus, Pseudomonas and Proteus. A common virus is herpes simplex. The most common fungus infection around the nails is Candida albicans. The pathogen enters through a skin break from a cut, a hangnail or a torn cuticle around the nail.

Chronic water exposure makes the skin more vulnerable. Detergent exposure from frequent washing of dishes is another common reason for skin breakdown. Finger sucking can cause a mixture of mouth flora and fungus infection.

There is pain and swelling around the nail (thanks to www.eatonhand.com for this image) or underneath the nail in the case of a subungual infection. If the infection is chronically lingering on, then the nail will grow in a distorted fashion. If the tendons get infected, which happens only rarely,there would be acute pain associated with finger or toe movements.

The diagnosis is largely a clinical one, based on experience of the physician. Swabs for fungal, viral or bacterial identification should be obtained whenever possible.

An acute paronychial infection is treated with soaks in salt water several times per day and with oral antibiotics such as cephalexin and dicloxacillin.

If there is a lot of accumulation of pus, this has to be drained surgically, which will also relieve the pain substantially. Antibiotics are then continued until the wound has healed. In diabetics in addition to the above measures the diabetes needs to be controlled tightly to prevent future similar infections. Candida albicans is treated with oral fluconazole. This is combined with topical antifungal lotion (e.g. miconazole) or cream (ketonazole) (Ref. 3, p. 800 and Ref. 2, p.81). 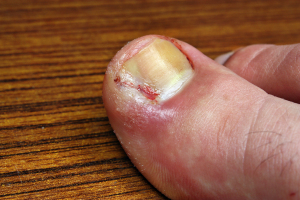