Tinea infections are fungal skin infections. The popular name for tinea infections is ringworm, probably because often the appearance of the rash is ring-like or worm-like. They can masquerade with many disguises;  essentially there are six common presentations as shown  below.  Many fungus infections of the skin belong into the same group of “dermatophyte infections”, and often they respond well to the same antifungal agents.

Here is a link to a site that depicts tinea corporis: Picture of ringworm infection.(thanks to www.nlm.nih.gov/medlineplus for this link).

Occasionally a fungus infection of the skin becomes a diagnostic problem as it can look like eczema, psoriasis or other skin disease.

The treating physician will have to re-evaluate the patient, if a treatment course with a medication does not heal the condition. At this point another option would be to refer the patient to a skin specialist and I will often mention this in the subchapters that deal with the various forms of ringworm (see links in the above table). This is particularly important, if there is a superinfection of the skin condition with another bacterial or fungal bug or if there is an underlying skin cancer that has been super-infected with ringworm. 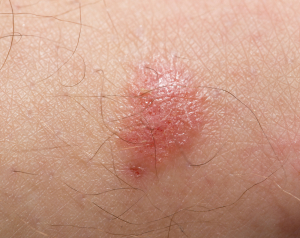 Athlete’s foot or foot fungus (tinea pedis) : fungi like to grow in moist skin between toes